A New Hero Is the Star of Marvel’s 25th Film

Update Required To play the media you will need to either update your browser to a recent version or update your Flash plugin.
By Caty Weaver
03 September 2021


The Marvel Cinematic Universe releases its 25th film this week, with a hero new to movies.

Shang-Chi and the Legend of the Ten Rings is based on a comic book series first published in 1973. Actor Simu Liu plays the lead character, Shang-Chi. As the movie opens, he is a low-level hotel worker in San Francisco. He rides the bus to work. He does not appear especially powerful or brave.

But by the time the film is over, Shang-Chi is a valuable addition to the Marvel universe. He proves to be a dependable fighter whose bravery is tested again and again. And he has a new transportation system. Forget the bus --- Shang-Chi rides dragons. 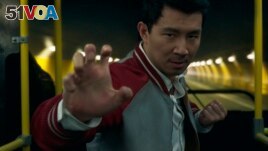 This image released by Marvel Studios shows Simu Liu in a scene from 'Shang-Chi and the Legend of the Ten Rings.' (Marvel Studios via AP)

In the story, Shang-Chi has run away from his oppressive father, a man more than 1,000 years old who seeks to control the universe. Shang-Chi's father is in possession of 10 magical rings that give him extraordinary powers.

Shang-Chi has fled because his father wanted him to become an assassin, someone who murders people as a job. But, now the old man wants the family back for an operation to rescue his dead wife.

Destin Daniel Cretton is the director of the new film and helped write the script. It includes many strange characters and places. For example, Morris is a pig-chicken creature with no face; another is an assassin with a huge knife for an arm. There is an underground fight ring, forests that move and exciting fight scenes, including one high above the streets on the outside of a very tall building.

Beneath the beauty and the violence, however, Shang-Chi and the Legend of the Ten Rings is a story about family ties, fatherly expectations and the modern world's demands over individual traditions.

The Associated Press reported this story. Caty Weaver adapted it for VOA Learning English. Mario Ritter, Jr. was the editor.

comic book –n. a magazine that is made up of a series of comic strips, which tell stories through a series of pictures

character –n. a person who appears in a story, book, play, movie, or television show

scene –n. a part of a play, movie, or story, in which a particular action or activity takes place