A New Robot Aims to Do the Heavy Lifting

Update Required To play the media you will need to either update your browser to a recent version or update your Flash plugin.
By Jonathan Evans
01 April 2021


The American robotics company Boston Dynamics recently made public a new robot called Stretch. It is designed to do only one job: to move containers, or boxes, in large storage buildings called warehouses.

Michael Perry is vice president of business development for Boston Dynamics. He said Stretch is the first robot designed for one job that the company has built. He added that the robot was developed because of requests from companies around the world.

"We heard pretty much universally across warehousing that truck unloading is one of the most physically difficult and unpleasant jobs... And that's where Stretch comes into play," Perry told Reuters. 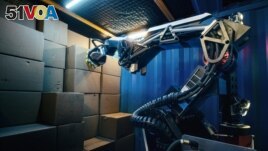 A Boston Dynamic's 'Stretch' robot is pictured in this picture obtained by Reuters on March 26, 2021. (Boston Dynamic/Handout via REUTERS)

Stretch has a small base that permits it to move around small spaces in existing warehouses without having to redesign them. The robot also has an arm with highly developed cameras that can identify and deal with boxes of many shapes and sizes.

Perry said Stretch can pick up boxes that weigh about 23 kilograms. He adds that the robot can move about 800 boxes in one hour.

Boston Dynamics is known for YouTube videos of its dog-like ‘Spot' and humanoid ‘Atlas' robots.

Perry said now is a good time for its latest robot to benefit from increasing demand for speedy home delivery.

Experts say the warehousing industry experienced strong growth in 2020. That growth is expected to continue this year. They say online buying during the coronavirus health crisis drove the need for a huge expansion in delivery services.

Boston Dynamics has not released a price for Stretch. But the company said the system can be set up without costly redesigns or investments in new buildings or structures.

Matthew Stock reported on this story for the Reuters news service. Jonathan Evans adapted this story for Learning English. Mario Ritter, Jr. was the editor.

pretty much –adv. (informal) not completely but mostly

universally –adv. by everyone or everything

base –n. the bottom part of something, support beneath something