Update Required To play the media you will need to either update your browser to a recent version or update your Flash plugin.
By Armen Kassabian
08 December 2020


Natalia Méndez is doing what she does best: cooking.

She is the owner of La Morada, a Mexican restaurant in New York City. Every day, delicious smells flow out into the street from the small restaurant.

The Méndez family opened La Morada in 2009. The award-winning restaurant is famous for traditional meals from the Oaxaca area of Mexico. Now its fame is increasing for another reason: La Morada is providing free food to needy people in the city.

About 650 free meals a day are produced in the restaurant, along with the food ordered by paying customers. Many of the people who receive the free food are older adults and disabled people. They cannot cook at their homes. Others have lost jobs and earnings because of the health crisis. 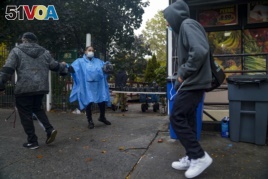 "A lot of people are out of work," says Maribel Baez, a local who is among the unemployed. "They don't have food to feed their kids. So, this is a helping hand for everybody," she added.

La Morada is in the Bronx, a poorer area of New York and home to many undocumented people. The health crisis has been especially severe there. The COVID-19 virus even spread among members of the Mendez family. They had closed their restaurant for a month to recover.

So, the family knows personally the pain and economic difficulties that the pandemic causes. And the experience led them to take action.

The Mendez' began the free food program after saving their business through donations gathered through online crowdfunding. Owner Natalia said she wants her food to help keep people healthy. She notes that doctors advise people to keep a safe distance, wear a mask and wash your hands.

"What I'm trying to do by preparing these healthy meals is to heal from the inside," she explained.

An organization called Neighborhood Benches gets the meals to people who have lost their jobs.

"A lot of people need this. They ain't working right now, this comes in handy. Everything counts. Every time I come from work, I see them out here, feeding the projects – that's definitely a good thing. A great thing...," he said.

"The first day we reopened, we made huge batches of soup and we gave it all out within the span of an hour. So, we just knew the demand was there, too."

Marco and his sister Yajaira moved to the United States as children. Their parents entered the country without permission. They never got the legal right to live in the U.S. or the right to work there. Thanks to a program called Deferred Action for Childhood Arrivals program, or DACA, they will not be deported, or expelled.

At the entrance to La Morada, a sign reads, "No Deportations." The message "Refugees Welcome" is painted on the door.

Natalia Mendez says undocumented people in the U.S. are largely defenseless in the face of the pandemic.

"We don't get any help from the government; there isn't a check that can assist or anything on the way that brings help quickly. As a community, we only have each other," she said.

customers – n. someone who buys goods or services from a business

pandemic – n. an occurrence in which a disease spreads very quickly and affects a large number of people over a wide area or throughout the world.

crowdfunding – n. the practice of funding a project or venture by raising many small amounts of money from a large number of people, typically via the internet

aint – v. common in the very informal speech, meaning are not or is not

batches – n. an amount of something that is made at one time

span – n. the period of time between two dates or events