'A Princess of Mars,' by Edgar Rice Burroughs, Part Four

Update Required To play the media you will need to either update your browser to a recent version or update your Flash plugin.
By VOA
01 May 2020


Editor's note: This is the fourth in our series of programs called "A Princess of Mars." The story is from a series of books by Edgar Rice Burroughs.
Last week, we told how John Carter observed a fierce battle between the green Martians and a race of red, human-like creatures. He also saw the beautiful Princess Dejah Thoris being captured after the battle. Shep O'Neal is the voice of John Carter. Steve Ember is Tars Tarkas. Barbara Klein is Sola. And Gwen Outen is Princess Dejah Thoris. Paul Thompson adapted this story for VOA Learning English. Paul Thompson and Mario Ritter produced it.

A short time later, John Carter, the Princess and their friend, the green Martian woman Sola, attempt to escape rather than face death. The Princess and Sola must flee while John Carter tries to slow the green warriors who are chasing them. John Carter continues to tell what happens in Edgar Rice Burroughs' story, "A Princess of Mars."

JOHN CARTER: The huge green warrior Tars Tarkas came slowly toward me with his thin sword. I backed away. I did not want to fight him. I did not wish his death. He had been as kind to me as a green Martian can be. 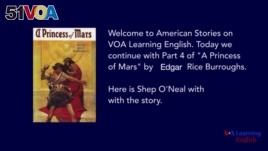 As I stood watching him, a rifle fired in the distance, then another and another. Tars Tarkas and his warriors were under attack from another tribe of green warriors.

Within seconds, a terrible battle raged. As I watched, three of the attackers fell on Tars Tarkas. He killed one and was fighting with the other two when he slipped and fell.

I ran to his aid, swinging my sword. He was on his feet. Shoulder-to-shoulder, we fought against the attackers. They finally withdrew after an hour of fierce fighting.

TARS TARKAS: John Carter, I think I understand the meaning of the word "friend." You saved my life when I was about to take yours. From this day, you are no longer a captive among our people, but a leader and great warrior among us.

JOHN CARTER: There was a smile on his face. Once again, he took off a metal band from his arm and gave it to me.

TARS TARKAS: I have a question for you John Carter. I understand why you took the red woman with you. But why did Sola leave her people and go with you?

JOHN CARTER: She did not want to see me or the Princess harmed. She does not like the great games held by your people where captives are led to die. She knows if she is caught, she too will die in the games. She told me she hates the games because her mother died there.

TARS TARKAS: What? How could she know her mother?

JOHN CARTER: She told me her mother was killed in the games because she had hidden the egg that produced her. Her mother hid Sola among other children before she was captured. Sola said she was a kind woman, not like others of your tribe.

Tars Tarkas grew angry as I was speaking. But I could see past his anger. I could see pain in his eyes. I immediately knew Sola's great secret.

I have a question for you, Tars Tarkas. Did you know Sola's mother?

TARS TARKAS: Yes... and if I could have, I would have prevented her death. I know this story to be true. I have always known the woman who died in those games had a child. I never knew the child. I do now. Sola is also my child.

JOHN CARTER: For three days, we followed the trail left by the Princess Dejah Thoris, Sola and poor ugly Woola. At last, we could see them in the distance. Their animal could no longer be ridden. They were talking. When we came near, Woola turned to fight us. I slowly walked to him with my hand out.

Sola was standing nearby. She was armed and prepared to fight. The princess was lying next to her feet.

Sola, what is wrong with the princess?

SOLA: She has been crying much these past few days, John Carter. We believed you died so we could escape. The thought of your death was very heavy on this woman...my friend Dejah Thoris. Come and tell her you are among the living. Perhaps that will stop her crying.

JOHN CARTER: I walked to where the Princess Dejah Thoris was lying on the ground. She looked at me with eyes that were red from crying.

Princess, you are no longer in danger. Tars Tarkas has come with me as a friend. He and his warriors will help to see you safely home.

And ... Sola! I would have you greet your father -- Tars Tarkas -- a great leader among your people. Your secret no longer means death to anyone. He already knows you are his daughter. The two of you have nothing to fear.

Sola turned and looked at Tars Tarkas. She held out her hand. He took it. It was a new beginning for them.

DEJAH THORIS: I know our world has never before seen anyone like you, John Carter. Can it be that all Earthmen are like you? I was alone, a stranger, hunted, threatened. Yet you would freely give your life to save me.

You come to me now with a tribe of green warriors who offer their friendship. You are no longer a captive but wear the metal of great rank among their people. No man has ever done this.

JOHN CARTER: Princess, I have done many strange things in my life, many things much smarter men would not have done. And now, before my courage fails, I would ask you, to be mine in marriage. She smiled at me for a moment and then her dark eyes flashed in the evening light.

DEJAH THORIS: You have no need of your courage, John Carter, because you already knew the answer before you asked the question.

JOHN CARTER: And so Dejah Thoris, Princess of Helium, a daughter of the Red Planet Mars, promised herself in marriage to John Carter, a gentleman of Virginia.

JOHN CARTER: Several days later, we reached the city of Helium. At first, the red men of Helium thought we were an attacking army. But they soon saw their Princess. We were greeted with great joy. Tars Tarkas and his green warriors caused the greatest excitement. This huge group of green warriors entered the city as friends and allies.

I soon met Tardos Mors, the grandfather of Dejah Thoris. He tried several times to thank me for saving the life of the Princess. But tears filled his eyes and he could not speak.

JOHN CARTER: For nine years, I served in the government and fought in the armies of Helium as a Prince of the royal family. It was a happy time. The Princess Dejah Thoris and I were expecting a child.

Then, one day, a soldier returned from a long flight. When he landed he hurried to the great meeting room.

Tardos Mors met with the soldier and reported that every creature on the planet had but three days to live. He said the great machines that produced the atmosphere on the planet had stopped producing oxygen. He said no one knew why this had happened, but there was nothing that could be done.

The air grew thin within a day. Many people could do nothing but sleep. I watched as my Princess was slowly dying. I had to try something.

I could still move with great difficulty. I went to our airport and chose a fast aircraft. I flew as fast as I could to the building that produced the atmosphere of the planet.

Workers were trying to enter. I tried to help. With a great effort I opened a hole.

I grew very weak. I asked one of the workers if he could start the engines. He said he would try. I fell asleep on the ground.

It was dark when I opened my eyes again. My clothing felt stiff and strange. I sat up. I could see light from an opening. I walked outside. The land looked strange to me. I looked up to the sky and saw the Red Planet Mars. I was once again on Earth in the desert of Arizona. I cried out with deep emotion.

Did the worker reach the machines to renew the atmosphere? Did the air reach the people of that planet in time to save them? Was my Princess Dejah Thoris alive or did she lie cold in death?

For ten years now, I have watched the night sky, looking for an answer. I believe she and our child are waiting there for me. Something tells me that I shall soon know.

aid - n. the act of helping someone : help or assistance given to someone

atmosphere - n. a mass of gases that surround a planet or star