Report: Volunteer Who Dressed as Clown for Syrian Kids Killed

Update Required To play the media you will need to either update your browser to a recent version or update your Flash plugin.
By Bryan Lynn
02 December, 2016


A volunteer who helped entertain children in war-torn Syria reportedly has been killed.

The man, 24-year-old Anas al-Basha, was center director for the group Space for Hope. It supports hundreds of children who lost parents in Syria's civil war.

The Associated Press reported Basha was killed in an air strike Tuesday in the northern city of Aleppo.

Syrian rebels control eastern Aleppo, where an estimated 250,000 civilians are trapped. An estimated 100,000 of them are believed to be children.

The rebels are fighting government forces, supported by Russia, that are trying to retake Aleppo.

United Nations officials have said intense bombing in eastern Aleppo had left every neighborhood there unsafe. They said the fighting has "devastated" civilian living conditions. Attacks have also killed and wounded aid workers. 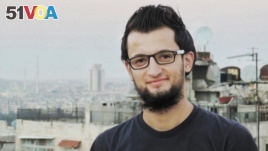 Anas al-Basha, who was known for dressing as a clown while helping children in war-torn Syria, was reportedly killed by an air strike in eastern Aleppo. (Facebook)

The Space for Hope supports 12 schools and four centers providing psychological and financial aid to children. Anas al-Basha helped lead these efforts. He also was known for dressing as a clown to try to cheer up the children and make them laugh.

The Associated Press reported that Basha was killed in an air strike in the Mashhad neighborhood of eastern Aleppo. Many civilians, including Basha's parents, had already fled the increasing attacks in the city.

Basha's brother Mahmoud wrote about the loss on his Facebook page.

He said his brother remained in Aleppo to "help the civilians and give gifts for the children in the streets to bring hope for them." He said Basha "lived to make children laugh and happy in the darkest, most dangerous place."

A co-worker of Basha told the AP she will remember him as a friend who loved his work with children. "He would act out skits for the children to break the walls between them," she said.

She noted that workers trying to help suffering children in Syria are currently "exhausted." She said they are trying to stay strong so they can provide psychological support to young war victims.

Bryan Lynn wrote this story for VOA Learning English, based on a report from the Associated Press. Caty Weaver was the editor.

clown – n. someone who dresses in funny clothes and has a painted face and makes people laugh

seal – v. to close off to prevent people from entering or leaving