Update Required To play the media you will need to either update your browser to a recent version or update your Flash plugin.
By VOA
15 August, 2014

Nouri al-Maliki said Thursday that he would leave his position as prime minister of Iraq. His decision opened the way for Haider Jawad al-Abadi to take Mr. Maliki's place.

Former colleagues describe Mr. Abadi as a good speaker and a direct person who is open to the ideas of others. He will need strong qualities. Among the issues facing the new prime minister are extremist militancy, religious division and political disputes. 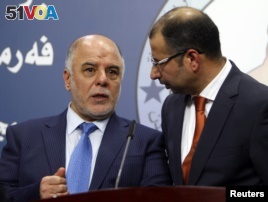 Haider al-Abadi, left, has been nominated as Iraq'a prime minister. He's shown with Salim al-Jabouri, speaker of the Iraqi Council of Representatives in Baghdad on July 15, 2014.

The man now responsible for leading Iraq out of crisis was born in Baghdad. But he has lived much of his life outside the country. For example, he worked in Britain as an advisor in the engineering industry until the United States invaded Iraq in 2003.

His family suffered under the rule of Iraqi dictator Saddam Hussein. Saddam's government arrested two of Mr. Abadi's brothers in 1980 for their association with the Dawa Party and executed them two years later. In 1981, the government arrested a third brother for the same reason. That brother survived. But he spent 10 years in prison.

Mr. Abadi also was involved in the Dawa Party while in London. He served as an active party leader in exile.

He returned home to enter politics after Saddam was ousted from leadership. As communications minister, Mr.Abadi rebuilt telephone systems that had been destroyed by war. He also brought the first mobile and Internet communications services into the country.

In 2005, he was elected to Parliament, then re-elected in March, 2010. Last year, he led the finance committee. The committee's responsibility is to rebuild the Iraqi budget.

The Constitution gives the president two weeks to choose a prime minister. That top official must come from Parliament's largest group.

So Nouri al-Maliki felt sure that he would serve a third term. But he has lost political support since his last appointment. Many blame him for the religious divisions in Iraq. He also is accused of widespread corruption. And critics say he has permitted the growth in power of Islamic militants who have seized much of the country's north and west.

Mr. Masoum twice extended the deadline – the time by which a prime minister must be named. Mr. Maliki broadcast a threat to take legal action against Mr. Masoum. On August 11, Mr. Masoum named Mr. Abadi to the top office.

In recent days, Mr. Abadi has promised to fight corruption and protect all Iraqis. He called on citizens to forget their differences and unite toward common goals for the future. He promised that Mr. Maliki would continue as an important political partner. And he praised the former leader for his efforts to deal with terrorism.

From VOA Learning English, that's IN THE NEWS.

This story is based on a report by VOA's Cecily Hillary. It was adapted by Jeri Watson and edited by Mario Ritter.