Update Required To play the media you will need to either update your browser to a recent version or update your Flash plugin.
By VOA
24 August, 2012

This week, a Republican lawmaker's comments pushed the debate about abortion to the center of the election campaign. Missouri Congressman Todd Akin is a candidate for the United States Senate. A reporter asked him to explain his opposition to the operation, even in cases of rape. Mr. Akin said it was his understanding from doctors that rape victims rarely get pregnant. He said that, in the case of what he called "legitimate rape," the female body has ways to stop a pregnancy. And he said the rapist should be punished, not the child resulting from the attack. 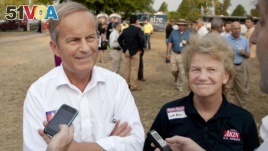 Representative Todd Akin of Missouri and his wife Lulli talk with reporters in the town of Sedalia.
His comments were widely criticized by both Democrats and Republicans. Many described them as "insensitive." President Obama and Mr. Romney were quick to condemn the statements.

OBAMA: "The views expressed were offensive. Rape is rape."

Congressman Akin has apologized. He even approved a political advertisement asking for forgiveness.

AKIN: "Rape is an evil act. I used the wrong words in the wrong way, and for that I apologize."

But some people say the apology is unlikely to stop calls from Republican leaders for him to leave the Senate race. Political observer Rhodes Cook says the issue shows the problem Republican candidates have with women voters.

COOK: "They saw this being a terrible comment, one that made them by extension appear to be insensitive to women and their plight, particularly as victims of a horrendous crime like rape."

Rhodes Cook and other observers say the comments could provide more fuel for Democratic claims that Republicans are leading a "war on women." Republicans have faced criticism from women's groups for opposing abortion and rules that health care insurance pay for birth control.

On Tuesday, Republican delegates agreed to support a call for a constitutional ban on abortion as part of their party's platform. The statement makes no exceptions for rape or the sexual attack of a child or young person by a family member. The Democratic Party platform supports a woman's right to choose.

Larry Sabato is head of the Center for Politics at the University of Virginia. He says social issues like abortion usually have a big influence on voter support.

SABATO: "People have very strong feelings on both sides, and it's a single issue for a lot of people. Once they know your position on it, pro or con, pro-choice or pro-life, they decide how they're going to vote, They actually ignore economic issues and issues of foreign policy and a whole wide range of other subjects."

Both he and Rhodes Cook say it is unclear whether the comments will have an effect on the elections in November. But they say the comments are likely to live on in Democratic political ads. And they say that if Mr. Akin continues to ignore calls to end his candidacy, the effects could be major.