According to v. As Per

Update Required To play the media you will need to either update your browser to a recent version or update your Flash plugin.
By Faith Pirlo
28 October 2022


Hello! This week on Ask a Teacher, we will answer a question about the difference between the phrases "as per" and "according to."

This is Mengwen. I just wanted to know what is the difference between "as per" and "according to" when writing an email. Many thanks in advance. Mengwen 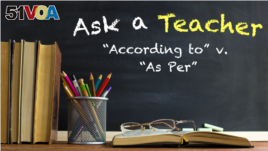 This is a great question.

In some cases, we can use both of these expressions in the same way. But they do have slight differences in tone and formality.

Let's start with "according to."

"According to" is described as a preposition in many dictionaries.

"According to" means "as stated by someone or shown by something." It is usually used at the beginning of a sentence.

Here are some examples:

According to our teacher, the final paper is due before the end of the day.

According to my last email, if we do not schedule the event soon, we will not be able to do so until next year.

It can also mean, "in a way that agrees with." For this meaning, "according to" can appear in the middle of a sentence. For example:

The teacher divided the class according to age. Any student born before July was put in group A, and anyone born July 1st or after was placed in group B.

The term "according to" is used very generally. The tone or feeling that we get from it is neutral, meaning neither good nor bad. It can be used in both formal and informal situations.

"According to" is used best when we expect something to have happened, or for setting up meetings or completing requests.

This use is most closely related to "as per," so let's move on to that discussion now.

"As per" means "in accordance with." The expression combines the adverb "as" with the preposition "per." Here is an example:

As per your request, I have listed all of the items that we need to send out by next week.

In this case, it has the same meaning as "according to." And we can use it in similar situations when we want to point out something previously referenced. But it is best to use "as per" with more formal requests that have specific times and dates. The term is often used in commercial or business settings.

We can also use just the preposition "per" in the same way, as in this example:

I handed in the test before the due date, per your instructions.

Both "according to" and "as per" relate to what was previously said or done. "According to" is more general and can be used in different situations. "As per" is more formal and is often used for business, especially with specific due dates and requests.

If you are still unsure about which to use, try thinking of the connotation of each. Connotation is the idea, feeling or association linked to a word or phrase.

Since "according to" is more general and can be used in a lot of different situations, it usually has a neutral connotation.

In recent years, especially with many jobs going online, "as per" is sometimes seen in a more negative way. This has led to many internet memes showing how "as per" is used in emails.

So you might want to choose "according to," just in case.

Please let us know if these explanations have helped you, Mingwen.

in accordance with – phr. following or obeying a rule, law, wish, etc.