Update Required To play the media you will need to either update your browser to a recent version or update your Flash plugin.
By VOA
29 February, 2016


There was more excitement about the discussion of diversity than the red carpet or the Oscars at the 2016 Academy Awards on Sunday night.

Host Chris Rock funny monologue did not soften the conversation but sharpened the racial issues in Hollywood instead. His opening lines set the tone. He welcomed the audience to the Academy Awards, in his words, "otherwise known as the white People's Choice Awards." 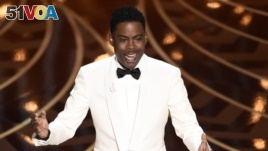 Host Chris Rock speaks at the Oscars on Feb. 28, 2016, at the Dolby Theatre in Los Angeles.

He also said he thought about quitting the position of host after all the controversy over the lack of diversity. But he said he could not lose another job to Kevin Hart, another black comedian and actor.

Some entertainers boycotted the Oscars because there were no people of color among acting nominees. That was true last year as well. Chris Rock took aim at both sides.

Jada Pinkett Smith was the de facto leader of the boycott of the 2016 Oscars. She tweeted that she was angry her husband Will Smith did not get nominated for his work in "Concussion."

Rock said Sunday night that it was also unfair Will Smith got paid $20 million to star in "Wild Wild West." The 1999 movie was a critical and financial failure. He also questioned Jada Pinkett Smith's "boycott" of the Oscars. "Isn't she on a TV show?" he asked, suggesting she was not invited to the movie awards. 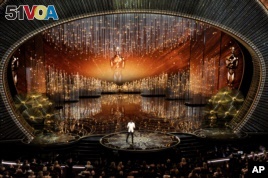 Host Chris Rock speaks at the Oscars on Sunday, Feb. 28, 2016, at the Dolby Theatre in Los Angeles. (Photo by Chris Pizzello/Invision/AP)

Throughout the show producers included references to the lack of diversity in Hollywood. A montage of some of the nominated movies replaced white actors with black actors.

The crowd laughed the loudest at the sight of Tracy Morgan playing "The Danish Girl." Actress Leslie Jones took part in a spoof of "The Revenant" and screams "There are no actresses in this movie!"

This year's competition did not appear as heated as in some past Oscars. "Spotlight" was seen as having a pretty good chance at winning best picture, and it did. Many critics and movie fans believed that Leonardo DiCaprio had to win the best actor award for "The Revenant." And he did. It was the actor's sixth Oscar nomination but the first time he left with the Academy Award.

And, the leader of "The Revenant," Alejandro González Iñárritu won the Oscar for best directing. It was his second win in a row. Last year, he took the trophy home for his film "Birdman."

The Academy of motion Picture Arts and Sciences honored "Son of Saul" with the Oscar for best foreign film. The Hungarian movie tells of two days in the life of a Hungarian prisoner working at the Auschwitz death camp.

de facto – adj. used to describe something that exists but that is not officially accepted or recognized

spoof – n. a humorous movie, book, play, etc., that copies something in a silly and exaggerated way

trophy – n. an object (such as a large cup or sculpture) that is given as a prize for winning a competition