Update Required To play the media you will need to either update your browser to a recent version or update your Flash plugin.
By Anna Matteo
04 October, 2016


It is no surprise that within many education systems, wealthier students often test better than poorer students.

To education experts this is often called the "achievement gap."

What is a surprise is that, in the United States, the achievement gap seems to be closing, at least a little. That result surprised researchers at Stanford University in California.

Sean Reardon is a professor of poverty and inequality in education at Stanford. He studied children and how they prepare for kindergarten classes. He also looked at how their preparation has changed since the 1990s.

Kindergarten programs are for boys and girls before they enter first grade. At this level, children need to demonstrate simple counting, an ability to listen and language skills. They need to be able to focus on a project and act responsibly in a classroom. 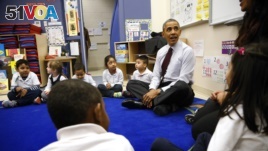 Reardon found that from 1998 to 2010 the achievement gap closed a small amount. He said it was not a huge change. The important thing, he said, is that the gap is closing.

One way to reduce the gap is to offer pre-kindergarten programs to very young children.

Such classes are already being offered in some areas around the United States, including the U.S. capital, Washington, D.C. In fact, education reformers may want to look to Washington as a role model.

Vincent Gray is a former mayor of the District of Columbia. When Gray was chairman of the D.C. Council, he wrote the legislation for universal pre-K. His measure gave parents of all children in Washington the choice to begin school at either age 3 or 4.

"We've always had some form of early childhood care in the District of Columbia, for decades. But what we didn't have was universal access. And I did the legislation in 2009 as Chairman of the Council to get it done. And then when I became the mayor, when I was sworn in in 2011, it gave me an incredible opportunity to be able to fully implement the legislation. The reason why I did it is that I believe that the opportunity to learn in a formal sense should not wait until a child is 5 years old."

Gray says he made sure the legislation was in effect and fully enforced during his four years as mayor. He was defeated for re-election, but is now a candidate for re-election for a seat on the D.C. council.

Today, most of Washington's youngest children are in school. Gray explains that the pre-K programs are not a requirement in the city. Parents can still choose what is best for their family. But many parents are choosing education.

"We now have in the District of Columbia, we have over 80 percent of our 3-year-olds that go to school. And I might add, it's not mandatory. You're not required to put your child in school. But virtually no parent at this stage is saying ‘I don't want my child in school.' They want them in school because there's not a cost associated with it, other than the cost of them not having the opportunity to learn. And then we have 94 percent of our four-year-olds who go to school all day. We have essentially reached universality."

Pre-kindergarten classes for 3- and 4-year-olds offer hope for many youngsters. It is more than learning the ABCs or counting to 100. These classes give the youngest students the chance to learn how to listen, develop social skills, and interact with others.

However, there are theories that say a child does not need schooling at the age of 3 and 4. If we are looking at test results, Finland beats the United States and most other countries in mathematics, reading and science. Yet Finnish children do not start school until age 7.

Perhaps there is not a one-size-fits-all answer. Perhaps different children need school at different times.

Generally, wealthier parents have more financial resources to help their children. Educated parents -- wealthy or not -- may know how to use the resources that are available to them. For example, they may take their children to free events at a public library or recreation center. Washington, D.C. also has many museums with free admission.

Pre-kindergarten classes do more than educate the child. They also bring parents and caregivers into the schools. This point of contact, explains Gray, is a valuable time to educate families.

A federal study found that, overall, parent involvement increased with such contacts. But it increased even more among low-income parents. It shows schools offer a place where conversations with these parents can happen.

campaign trail – n. a route that takes a candidate for office to different places in order to talk to people during a campaign <The candidates talked about the people they met on the campaign trail.>

role model – n. a person whose behavior in a particular role is imitated by others

implement – v. to begin to do or use (something, such as a plan) : to make (something) active or effective

associated – v. to combine or join with other parts

library – n. a place where books, magazines, and other materials (such as videos and musical recordings) are available for people to use or borrow

socio-economically – adv. in a way that relates to, or involves a combination of social and economic factors

game changer – n. an element or factor that changes an existing situation or activity in a significant way