What Is Your Achilles' Heel?

Update Required To play the media you will need to either update your browser to a recent version or update your Flash plugin.
By VOA
26 December, 2015


Hello! And welcome to Words and Their Stories, a VOA Learning English program about American expressions.

The Greek poet Homer has given us many phrases. A famous one is "Achilles' heel."

The Greek story of Achilles' heel is the one Homer tells in the long poem called "The Iliad." Here is how the story goes. 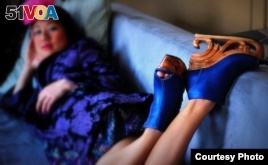 These actual high heels worn by this woman may become her (literary) Achilles' heel if they stop her from running from danger ... or from simply walking. (COURTESY PHOTO)

When Achilles was a baby his mother bathed him in the river Styx. She believed the river had magical powers. Bathing her son in its waters, she thought, would make Achilles immortal, deathless, like a god.

But one part of his body did not get wet: his heel, where his mother held him. His heel, therefore, was the one spot where Achilles could be hurt.

Achilles grew up. He became a great warrior. During the Trojan War, he fought with the Greek army.

None of the Trojan weapons was able to hurt Achilles. The god Apollo, however, knew of Achilles' weak spot. Apollo told the prince of Troy, named Paris, all about it. While not actually written in "The Iliad," legend says Paris shot an arrow at Achilles' heel and killed him.

If I am trying to lose weight but love to eat ice cream, you could say that my love of ice cream is my Achilles' heel.

And for many people, love is their Achilles' heel. Love leaves us helpless. Love makes us weak. People in love may find themselves doing foolish things. They may open themselves up to hurt or embarrassment.

And a person who is head over heels in love is really in a weak position. This phrase, however, does not come from Greek literature. It was first used in the 14th century to mean turning a cartwheel or somersault.

Head over heels gives a clear picture of one who has fallen deeply and passionately in love. Close your eyes and picture what a person may look like if he or she is spinning like a wheel, turning over and over.

That is heads over heels.

Let's hear this expression used in an example:

Hey, have you noticed something different about John recently?

What do you mean?

Well, he is usually such a good student. But lately he never has his assignments done. And he seems unable to focus in class.

Well, you know he has a new girlfriend. And he is head over heels in love with her.

Oh. That explains why he has been acting so strange lately.

Perhaps being head over heels in love has never been your Achilles' heel, but you can probably imagine how powerful the feeling is. Like in this song by Tears for Fears, something just happens and you are head over heels.

What is your Achilles' heel? Let us know in the Comments section.