ACT Test Scores in US Fall to Lowest in 30 Years

Update Required To play the media you will need to either update your browser to a recent version or update your Flash plugin.
By Anna Matteo
15 October 2022


This year's results on a U.S. college admissions test are the lowest they have been in 30 years. Experts say the results are the latest evidence of learning interference caused by the COVID-19 pandemic.

The American College Test, or ACT, is a standardized test used for college admissions in the United States. The ACT is administered by a nonprofit organization of the same name. 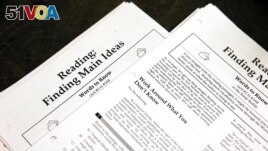 In addition, an increasing number of high school students failed to meet any of the subject-area benchmarks, or targets, set by the ACT. This shows a drop in preparedness for college-level studies.

The test results were made public in a report on Wednesday. The report shows that 42 percent of ACT-tested graduates in the class of 2022 met none of the subject benchmarks in English, reading, science, and math.

These benchmarks are considered predictions for how students might perform in college classes. In 2021, 38 percent of ACT test takers failed to meet any of the benchmarks.

"Academic preparedness is where we are seeing the decline," said Rose Babington. She is senior director for state partnerships for the ACT.

ACT scores have been dropping steadily in recent years. However, the large drop during this past year is "particularly alarming," said ACT chief executive officer Janet Godwin.

Godwin added, "We see rapidly growing numbers of seniors leaving high school without meeting college-readiness benchmarks in any of the subjects we measure."

The results also offer a look into systemic unfairness in education that existed before the pandemic closed schools.

For example, students who are not offered high-level classes in high school suffered more during the pandemic, Babington said. Those students usually are from rural areas or come from poorer families and are often students of color.

The number of high school students taking the ACT has dropped 30 percent since 2018. That is because high school graduates are increasingly not going to college. Also, some universities no longer require standardized test scores for admission.

Standardized tests such as the ACT have faced growing concerns that they are unfair to minority and low-income students. Students who take costly test preparation classes or advanced classes in high school often perform better.

Babington defended the test as a measure of college readiness. "Now more than ever, the last few years have shown us the importance of having high-quality data to help inform how we support students," Babington said.

Colleges and universities are increasingly ending long-standing requirements for standardized tests. The University of California system even has a "test-blind" policy. This means that test scores are not considered even if they are supplied.

But many students still take the tests. If their scores are high, they may have an advantage over other students.

Tyrone Jordan is a first-year student at Arizona State University, which does not require standardized test scores. He said he took the ACT and the SAT to get ahead of other students and to help him receive money in the form of scholarships.

Jordan said he wants to study mechanical engineering. He said he thinks the difficult classes at Tempe Preparatory Academy prepared him for college. His standardized test results helped support him and his family financially.

Jordan said, "All the test did for me was give me extra financial money."

standardized – adj. to bring into conformity with a standard

benchmark – n. something that serves as a standard by which others may be measured or judged

decline – n. a change to a lower state or level : v. to tend toward an inferior state or weaker condition

alarming – adj. causing people to feel danger or to be worried or frightened

rapidly – adv. marked by a fast rate of motion, activity, succession, or occurrence

senior – n. a student in the year preceding graduation from a school of secondary or higher level

income – n. a gain or recurrent benefit usually measured in money that derives from capital or labor

scholarship – n. a grant-in-aid to a student (as by a college or foundation)