Update Required To play the media you will need to either update your browser to a recent version or update your Flash plugin.
By Mario Ritter
30 June, 2016

Secretary of State John Kerry spoke to reporters at the department's headquarters. He said human trafficking remains a major problem in some areas of the world.

Human trafficking has been described as organized criminal activity in which human beings are treated as possessions. The new report explores issues such as the use of modern slavery, child soldiers, and forced marriage. It also describes steps taken by governments around the world to fight trafficking.

The State Department and rights groups estimate that the trafficking industry earns about $150 billion dollars a year. They say 20 million people leave their home countries and go overseas to be abused as laborers. 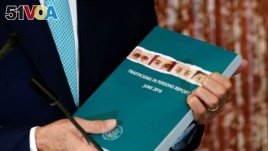 U.S. Secretary of State John Kerry holds a copy of the 2016 Trafficking in Persons (TIP) report for 2016.

The report rates countries, placing each in one of three tiers, or groups, and also to a watch list.

In the first tier are countries that meet minimum standards for dealing with human trafficking.

The second tier is made up of countries that do not meet the minimum levels, but are making efforts to comply.

Tier 3 is the group of countries judged to do the least to fight human trafficking.

Thailand has been at the center of trafficking groups that operate across Southeast Asia. Activists are criticizing the State Department's decision to move the country from Tier 3 to its Tier 2 Watch List.

The U.S. ambassador to Thailand is Glyn Davies. He says the country's higher ranking is a sign of better efforts against trafficking.

But some activists disagree. Kristen Abrams is the director of the Alliance to End Slavery and Trafficking, a group known as ATEST.

She said, "The conditions are worsening in that country for migrant workers. There continues to be egregious labor abuse, particularly in the seafood industry."

Abrams said she believes Thailand should be in Tier 3. She also disagreed with Malaysia's ranking in the Tier 2 Watch List. Malaysia was upgraded one step last year.

The Migrant Workers Rights Network said it supported the upgrade for Thailand, saying it had made "significant improvements." The group claims to have 4,000 members in Thailand and Myanmar.

Prayuth, a former general in the Thai military, ousted Thailand's civilian leadership two years ago. He has used his powers to try to reduce trafficking in Thailand.

Thailand's eastern neighbor, however, was downgraded in the new U.S. report. Myanmar, the country also known as Burma, was placed in Tier 3.

The report said Myanmar had not done enough to stop the use of child soldiers and forced labor. It also noted the treatment of Rohingya Muslims in the Buddhist-majority country.

Myanmar's government has faced criticism for not doing enough for the group. In fact, the government refuses to use the word Rohingya when talking about the group. Myanmar considers them Bengalis who are illegal immigrants from Bangladesh.

Myanmar is now in its first year of a largely democratically elected government.

The TIP report places Myanmar with Iran, North Korea and more than 20 other countries said to be the worst in dealing with the trafficking of humans.

The State Department describes the report as a tool to work with foreign governments on the issue of human trafficking.

Steve Herman and Ken Bredemeier reported this story for VOANews. Mario Ritter adapted it for Learning English. George Grow was the editor.

exploit – v. to use, usually involving misuse or mistreatment

comply – v. to do what has been asked or ordered