Update Required To play the media you will need to either update your browser to a recent version or update your Flash plugin.
By Bryan Lynn
21 October, 2016


Chinese activists are demanding that a polar bear named Pizza be moved from captivity in a shopping center to a better home.

About 50 animal activist groups across China have joined together to call for moving Pizza. Since January, she has been kept inside an animal display at a shopping center in the city of Guangzhou, in southeastern China.

The groups plan to present a letter to local officials next week urging them to get involved to help relocate Pizza. The activists say Pizza has recently shown signs that her mental state is getting worse.

The campaign to move Pizza grew larger last March, when the group Animals Asia posted a video of the polar bear online.

In the video, Pizza is seen lying down in the space where she lives at Guangzhou's Grandview Aquarium. The video shows possible health issues for the animal, including watery eyes and a twitching mouth. The video went viral on the internet and people around the world became heartbroken over the polar bear.

This led to Pizza being called "the saddest polar bear in the world." Since then, an online petition started by Animals Asia has gotten more than 680,000 signatures supporting the cause.

Animals Asia has called for the aquarium to be closed. The living space for Pizza is less than 66 square meters. That is too small for an animal her size, the group said. It also said she must deal with people tapping on the glass of the display for most of the day.

So far, the aquarium has refused to change Pizza's living conditions or move her to another home. It says its operation is legal because it has the required permits from the government.

The Grandview Aquarium turned down the offer. 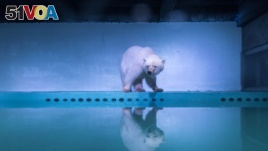 A polar bear is seen in an aquarium at the Grandview mall in Guangzhou, Guangdong province, China, July 27, 2016.

In a statement to VOA, Grandview said Pizza was not bred through natural means, and left her mother at age 2. It said this means she would not be able to survive with other polar bears in the wild.

The aquarium said the health of Pizza and other animals there is important. A team of 130 people look after the animals every day. They receive regular physical examinations, Grandview said.

The statement added "our star animal Pizza" remains healthy, with results from the most recent tests falling in "the normal range."

A video released by the aquarium said it has also increased efforts to provide Pizza with more activities to improve her mental and physical state.

Wendy Higgins is with the London-based Humane Society International (HIS). She says Grandview does not provide conditions similar to a polar bear's natural habitat. She worries that Pizza is showing signs of mental problems, including unusual head movements and performing the same acts over and over.

"Once you've got an animal displaying those kinds of very typical behaviors, the clock is ticking really," Higgins said.

display – n. a collection of things for people to look at

relocate – v. move to another place

aquarium – n. a building where fish and other animals are kept for people to look at

twitch – v. moving suddenly without the ability to control

habitat – n. place where a plant or animal naturally lives

ticking – v. to make a small, quick, sound, especially made by a clock or watch

the clock is ticking – expression. used to express that something must be done quickly because there will soon be no time left