Update Required To play the media you will need to either update your browser to a recent version or update your Flash plugin.
By Bryan Lynn
22 April 2022

The East African Crude Oil Pipeline aims to transport oil from the Hoima oilfields in Uganda to the Tanzanian coastal city of Tanga.

The approval to start building the pipeline came in early February after a final agreement was reached between the project's major backers. But a growing list of financial supporters have decided to quit the project in recent weeks as public opposition grew. 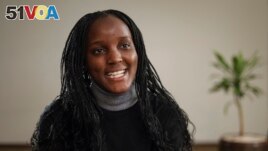 The 1,443 kilometer oil project is being described as the longest heated pipeline in the world. The project is headed by the China National Oil Corporation and France's energy company TotalEnergies. Major oil companies in Uganda and Tanzania are also supporting the pipeline, which is expected to start transporting oil in 2025.

Opponents of the project say the pipeline will displace thousands of families and threaten water resources in the Lake Victoria and River Nile basins. The environmental group 350.org has estimated the pipeline will produce about 34 million metric tons of carbon dioxide emissions each year. That level of pollution, the group says, will fuel existing climate change.

"The climate crisis is affecting many people in Africa," environmental activist Vanessa Nakate told a recent gathering in Mombasa, Kenya. "There is no future in the fossil fuel industry, which has done more harm than good in much of Africa."

Growing pressure by numerous environmental groups has led a growing list of banks and insurance companies to pull out of the project. During the past week, major insurer Allianz Group withdrew its support.

So far, at least 15 banks and seven insurance companies – including HSBC, BNP Paribas and Swiss Re Group – have dropped financial support for the pipeline.

Omar Elmawi is a leader of #StopEACOP, a campaign to stop the pipeline. He told The Associated Press that by supporting the project, TotalEnergies "is putting profits over people."

"At a time when scientists call for the phasing out of fossil fuel projects...it is ill-advised and irresponsible to go ahead with this project, while ignoring the cries of those most affected," Elmawi said.

Environmental activist Hilda Nakabuye told Reuters the pipeline would be most harmful to women and children. Harm would result from spillage, pollution and displacement along the pipeline's path, she said.

TotalEnergies has defended the pipeline and says the project does not violate any environmental laws in Uganda or Tanzania. An environmental impact study carried out by the Netherlands Commission for Environmental Assessment raised concerns about risks to wildlife in the area. The study warns of possible harms to chimpanzees in the Bugoma, Wambabya and Taala forest reserves in Uganda.

Supporters of the pipeline have pointed to oil export earnings estimated to bring in about $2 billion each year. In addition, they say the project would provide at least 12,000 new jobs and could draw more development to the continent.

basin – n. a low area of land from which water flows into a river

fossil fuels – n. fuels such as coal, oil, or natural gas formed in the earth from dead plants or animals

insurance – n. an agreement in which you pay a company money and they pay your costs if you have an accident, injury, etc.

phase out – v. to gradually stop using something

reserve – n. an area of land where animals and plants are protected