Update Required To play the media you will need to either update your browser to a recent version or update your Flash plugin.
By Hai Do
18 March 2020

The fast-spreading new coronavirus that jumped from animals to humans has now infected over 200,000 people around the world. It also is blamed for more than 8,700 deaths.

President Donald Trump said he would use an existing U.S. law to give the government additional powers to fight the disease and to ease economic trouble. The Defense Production Act gives the president extraordinary power to order industries to expand production and provide necessary materials. 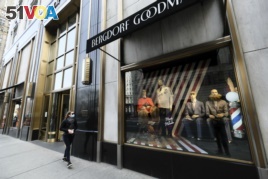 The Trump administration is working with Congress to pass a $1 trillion spending plan to support the economy. Among the proposals is $500 billion in direct payment to Americans.

U.S. financial markets had sharp losses Wednesday. The New York Stock Exchange again temporarily halted trading because of a sharp drop in stock prices. It opened again and stock measures regained some of their lost value. Observers note that the stock market has lost nearly all of its gains from the past three years.

Oil prices have fallen sharply in recent days to their lowest level in years.

Also Wednesday, the Associated Press reported that the three major American car makers, Ford, General Motors and Fiat Chrysler, are planning to close all factories in the U.S., Canada and Mexico. The move could keep 150,000 people from work.

In the state of California, Governor Gavin Newsom warned that, in his words, "martial law" could be put into effect. In the city of San Francisco, people are permitted to leave their homes only for food, medicine or exercise. And the mayor of New York said the city's 8.6 million residents should be prepared for a lockdown.

In Italy, the number of people who died from COVID-19 moved closer to China's. With another 475 reported deaths on Wednesday, the country has now linked more than 2,900 deaths to the disease. China has reported about 3,200 deaths. Iran also has been hit hard, with more than 17,000 cases and 1,100 deaths.

At many border crossings around Europe, cars and trucks are backed up after leaders closed them to nonessential traffic. At one point, trucks were backed up in Austria for 28 kilometers and cars for 14 kilometers.

"We have never lived through anything like this," Spain's Prime Minister Pedro Sanchez told a nearly empty parliament room. More than 90 percent of Spanish lawmakers stayed home.

Australian Prime Minister Scott Morrison warned that the crisis could last six months. He said "This is a once-in-a-hundred-year type event" as his country moved to restrict gatherings and overseas travel.

In Southeast Asia, the border between Malaysia and the city-state of Singapore was quiet after Malaysia shut its borders.

On Ecuador's Galapagos islands, Canadian Jessy Lamontaine and her family could not leave when their flights were suspended. "I was in tears this morning," Lamontaine said. "I couldn't get any answers from the airline. I had no money and didn't know whether I was going to keep my job."

Some good news did come out of Wuhan. Officials there reported just one new case for a second day.

Hai Do adapted this story from Associated Press and Reuters reports for VOA Learning English. Mario Ritter, Jr. was the editor.

lockdown –n. a situation in which prisoners are kept in their cells; a situation where people are to stay in their homes

quarantine –n. to be kept apart from others in order to halt the spread of disease