Update Required To play the media you will need to either update your browser to a recent version or update your Flash plugin.
By Mehrnoush Karimian-Ainsworth
01 June, 2016

The British superstar Adele wants people to enjoy her live performances, and not videotape them.

During a show last Sunday in Italy, Adele condemned someone in the crowd for videotaping the whole concert.

The singer asked the woman to stop filming her and enjoy the live show instead. Adele criticized the fan for setting up a tripod to support the camera, asking her to take it down. 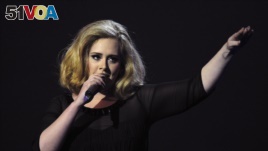 The British superstar Adele wants people to enjoy her live performances, and not videotape them.

The artist explained that her show was not a DVD, saying, "I'm really here in real life."

One Facebook user wrote that she also does not like it when people block her view at a concert because they are taping it.

Others felt that Adele should not have said anything at all to the woman.

Adele is halfway through her planned around-the-world concert tour. Those shows are to continue until the end of November.

Mehrnoush Karimian-Ainsworth wrote this story for Learning English. George Grow was the editor.

We want to hear from you. Write to us in the Comments section, and post on 51VOA.COM.

controversy – n. strong disagreement about something among a large group of people

embarrassed – v. to make (someone) feel confused and foolish in front of other people