Update Required To play the media you will need to either update your browser to a recent version or update your Flash plugin.
By Caty Weaver
08 September 2020


The image of an apple on a light. A clock on which time seemed to have frozen. Healthcare workers that look like astronauts on Mars.

Those are some of Irene Pressner's memories of her experience after becoming infected with the new coronavirus. The artist from Venezuela came close to death in New York City. After suffering severe pain and passing out a few times, she was finally admitted to a hospital. A few days later, her husband was also admitted. Only she survived.

Now in recovery and mourning, the artist continues experimenting to see how the virus changes her art. "My works have light, but now will also have the burden of what I lived," she says. 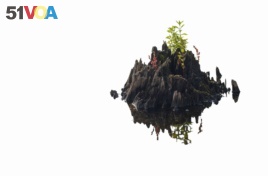 The coronavirus health crisis has led many artists to seek refuge in their work as they search for peace and meaning. Some have suffered the horror, the sickness and the loss of loved ones. Others are trying to control their fear and feelings of loneliness.

Pressner said the art she is making now comes directly from this period of self-discovery. She notes a series of pictures she took shortly before she got sick. The photography piece, called We Are Not Islands, gained new meaning during her isolation. "The other works are transitional, like I have not found myself yet," said the artist, who has been recognized in both Venezuela and the United States. Her award-winning works of art are part of the permanent collection at the Museum of Latin American Art in Long Beach, California.

In Brooklyn, New York, Venezuelan photographer Lara Alcántara dealt with the worry of her husband working as a doctor at a hospital. She created a make-believe world in images she publishes on social media.

The photos are pictures of herself. Some show how tired she feels in a humorous way: She appears stuck in a washing machine, ironing her head or buried under a child's playthings. Others show her love for clothing. In one image, she hangs along with her clothes.

Alcántara told The Associated Press she usually expresses her tensions and troubles through photography.

"The escape of photography was completely necessary," she added, noting that the news and the stories her husband brought home troubled her a lot.

Lately she has taken her art outdoors. In a piece created at the beginning of August in Florida, four different images of her surround some sort of burial grounds made of sea plants.

"I feel that many people realized that time is very valuable, but that we don't always use it to achieve our happiness. I feel that I found myself in this process and I hope to have inspired others do the same," she said.

The Associated Press reported this story. Caty Weaver adapted it for VOA Learning English. George Grow was the editor.

isolation – n. the state of being in a place or situation that is separate from others

iron – v. to use a heated device to make cloth smooth

inspire – v. to make (someone) want to do something: to give (someone) an idea about what to do or create