Update Required To play the media you will need to either update your browser to a recent version or update your Flash plugin.
By Bryan Lynn
15 September, 2018


Afghanistan has its own version of the famous British comedy actor Charlie Chaplin.

His name is Karim Asir. He wears makeup and clothes to look like Charlie Chaplin did in movies. Asir also uses similar physical movements. He performs on the streets and at events in the Afghan capital, Kabul.

Afghanistan has dealt with many years of deadly civil conflict, foreign military invasion and widespread destruction.

The 25-year-old actor says his goal is to use humor to help take people's minds off the difficulties they face every day. "It is very simple, I want to give Afghans a reason to smile," he said.

Charlie Chaplin rose to fame during the silent film age in the 1920s. His movies became popular around the world.

One of his most memorable characters was a funny-looking man known as "The Little Tramp." This character had no money and was always getting into trouble. The creative methods he used to get out of trouble were always humorous.

Asir told Reuters news agency that his family fled to Iran after the Islamic Taliban group took control of Afghanistan in 1996. He said as a child there he would watch Chaplin's movies on television. 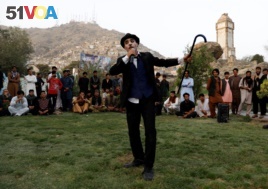 When the family returned to Afghanistan, Asir started wearing makeup and recreating Chaplin's characters. He also began performing in public, even though his parents expressed concerns about him making this his job.

Asir recently spoke to Public Radio International's show The World. He said his parents wanted him to seek more steady work choices, such as a politician or doctor. But he said he felt his interests and skills would be better used in other ways.

"I said to my father and to my mother that I can't be a doctor but I have [the] skill to become an artist," he told The World. He added that his parents showed understanding over time and he decided to study theater at Kabul University.

Now, Asir says he parents are pleased when they see his videos getting more than 1 million views on YouTube. And he said they like that people line up on the street to take pictures with him.

But it is not always easy for Asir to perform in a city that suffers repeated attacks by Taliban rebels and suicide bombers. Militants have threatened Asir, whose performances, they say, are un-Islamic.

"I want to give my people a chance to forget their problems such as war, conflicts and insecurity in Afghanistan," he told Reuters.

To do this, he keeps smiling while performing around the city and meeting with fans. But Asir says that inside, he cannot help but feel fearful about possible attacks.

"I am afraid of getting attacked by a suicide bomber or an explosion, but these issues cannot stop me from being Charlie Chaplin," he said.

Bryan Lynn wrote this story for VOA Learning English, based on reports by Reuters and Public Radio International. Caty Weaver was the editor.

comedy – n. entertainment such as a film, play, etc. that is funny

makeup – n. colors applied to the face for beauty

smile – n. make a happy or friendly expression in which the corners of your mouth curve up

character – n. a person included in a story