Update Required To play the media you will need to either update your browser to a recent version or update your Flash plugin.
By Mario Ritter
20 July, 2014

On Tuesday, Afghan President Hamid Karzai spoke to VOA about the dispute over the election. Mr. Karzai said he accepted a United States-negotiated deal to carry out the examination, or audit, because of accusations of cheating in the vote. The examination affects the second and final election, between the top two candidates, Abdullah Abdullah and Ashraf Ghani.

Speaking to VOA's Afghan Service, President Karzai said he did not welcome the agreement. He called it a "bitter pill" because of current political conditions in Afghanistan. 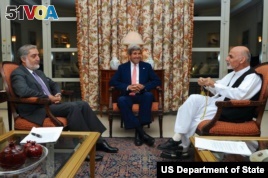 U.S. Secretary of State John Kerry, center, sits with candidates Abdullah Abdullah, left, and Ashraf Ghani. The U.S. helped negotiate a deal to audit the ballots and resolve the dispute.

"I accepted it because I wanted to get past this stage very quickly because the elections have already taken a lot of time in this country. No country in the world has such a lengthy electoral process and this must be corrected as well. The Afghan people are waiting, very much, very impatiently, to have their new president."

Tensions were high in the country after presidential candidates Abdullah Abdullah and Ashraf Ghani, both claimed victory in the final election to replace Mr. Karzai. The vote took place on June 14th.

Afghan former foreign minister Abdullah dismissed as false the results that put Mr. Ghani ahead by 1 million votes. Mr. Abdullah accused his opponent, election officials and President Karzai of working together to cheat in the voting.

The terms call on both candidates to honor the audit results. The winner must form a government of national unity immediately. And, a top U.S. official said the candidate who does not win the election will be included in the new Afghan government.

President Karzai says he welcomed the idea of a national unity government. He said all Afghan people should see themselves in their government. But he expressed concerns about reports saying the candidates agreed to create a parliamentary democracy.

"In order for Afghanistan to have a parliamentary form of government, we must, before that, make sure we have strong institutions, the civil service of the country must be entirely and totally apolitical and protected by law."

Mr. Karzai said some parts of government, like the military and judiciary, need to be protected from political intervention. He said Afghanistan needs more time to strengthen these parts of government in order to move from a presidential to parliamentary system.

Mr. Karzai is ending his second five year term. He says will stand firmly behind the next leader of Afghanistan.

This story was written for Learning English by Mario Ritter from a report by VOA's Aru Pande.