Update Required To play the media you will need to either update your browser to a recent version or update your Flash plugin.
By Hai Do
23 March 2022


The Taliban announced on Wednesday that high schools will not reopen for girls in Afghanistan.

The group went back on their promise, saying they would remain closed until a plan was drawn up to follow Islamic law and Afghan culture.

The decision surprised many people. It left students crying and drew condemnation from aid agencies, rights groups and the international community. 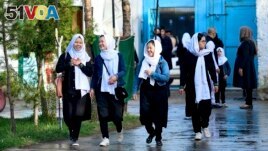 Girls arrive at their school in Kabul, Afghanistan, on March 23, 2022. But the Taliban said that high schools will not reopen for girls until a plan was drawn up to follow Islamic law and Afghan culture. (Photo by Ahmad SAHEL ARMAN / AFP)

Teachers and students from high schools in Kabul said the girls were excited to return on Wednesday morning, the first day of school in Afghanistan. But they were ordered to go home.

"We all became totally hopeless when the principal told us, she was also crying," said a student, not being named for security reasons.

The last time the Taliban ruled Afghanistan, from 1996 to 2001, they banned female education and most employment.

The international community has demanded the education of girls as a condition for any future recognition of the Taliban. The group took over the country in August following the withdrawal of American and allied troops.

United Nations Secretary-General Antonio Guterres said the Taliban's decision was "a profound disappointment and deeply damaging for Afghanistan." He said it violated "the equal rights of women and girls to education" and called for immediate re-opening.

Last week, the Afghan Ministry of Education had announced that schools would reopen for all students, including girls. On Tuesday evening, a spokesman even released a video congratulating all students on their returning to class.

However, on Wednesday, the Taliban news agency Bakhtar News reported that high schools would be closed for girls until a plan was drawn up to follow Islamic law and Afghan culture.

Suhail Shaheen is a senior Taliban member based in Doha. He blamed the delay on what he called a technical issue over clothing. He said the Ministry of Education was working on uniforms for students around the country.

"We hope the uniform issue is resolved and finalized as soon as possible," he said.

After seven months at home, 16-year-old Khadija returned to school on Wednesday morning. She had stayed up all night in excitement. But just minutes after lining up with her classmates for a welcoming speech, a school official told them they had to leave.

"We couldn't believe we face such conditions... it was like a mourning day. Everyone was crying and hugging each other," she said.

Returning home, she said, "I would like to be a doctor in the future but for now I have no hope, I am like a dead body."

Charlotte Greenfield reported this story for Reuters. Hai Do adapted the story for Learning English.

principal – n. the person in charge of a public school

uniform – n. a special kind of clothing that is worn by all the members of a group or organization

resolve – v. to settle or solve (something)

hug – v. to put your arms around someone especially as a way of showing love or friendship