Update Required To play the media you will need to either update your browser to a recent version or update your Flash plugin.
By Dan Friedell
31 August 2021


Salgai Baran recorded the top score out of 180,000 Afghan students on the country's national university entrance test. However, she is worried about her future education now that the Taliban is running Afghanistan.

Baran, 19, said she wants to stay in her country, but if she is not able to continue going to school, she will leave.

The Taliban leader who oversees higher education recently told the AFP news service that women will be able to continue school, but only if they are taught by women and do not go to class with men. 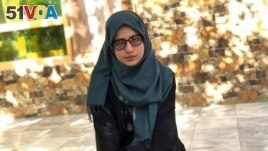 Salgai Baran, who received the highest the highest score in the entire country on Afghanistan's university entrance exams this year, poses for photograph at her home in Kabul, Afghanistan, Aug. 26, 2021.

On Tuesday, however, the Taliban asked women to stay home until it comes up with a "new procedure" for social interaction.

When the Taliban controlled Afghanistan in the past, women could not go to school or leave home without a male relative. Women had to cover their bodies from head to toe with clothing known as a burqa if they left home.

Baran said she always wanted to stay in Afghanistan to "serve my country and my people," but now she does not know if she can.

Women are worried they will be shut out from education and work as the Taliban takes more control in Afghanistan.

Observers think Baran has good reason to be worried about her future, despite what the Taliban says.

Heather Barr is a women's rights researcher who covers Asia for Human Rights Watch. She told VOA the Taliban statements so far "are not convincing anyone because everyone knows what their record is on women's rights."

Barr called the Taliban takeover "a terrible moment for girls," and added, they "feel their future has been ripped away from them overnight."

Before the Taliban takeover, there were about 100,000 women attending universities in Afghanistan and about 3.5 million girls going to school.

In government and in the country's parliament, women held about 30 percent of the jobs.

Barr said people take Taliban threats seriously because the group is so violent.

Shinkai Karokhil is a former parliament member in Afghanistan. She said the Taliban needs to speak more clearly about their plans for women and girls.

"It is frustrating," Karokhil said, that the Taliban "have not yet come with what will be the education system in the country."

If intelligent girls like Baran decide to leave Afghanistan, she said, it will hurt the country for many years.

Karokhil also said that there are many more girls and women who will continue trying to learn, even with the Taliban in control.

"The world should not forget them," she said.

Shaista Lami and Roshan Noorzai wrote this story for VOA. Dan Friedell adapted it for Learning English. Susan Shand was the editor.

score – n. the number of points that someone gets for correct answers on a test, exam, etc.

procedure – n. a series of actions that are done in a certain way or order : an established or accepted way of doing something

despite –prep. to cause (someone) to believe that something is true

convince –v. to cause (someone) to believe that something is true

rip–v. to tear, split, or open (something) quickly or violently