Update Required To play the media you will need to either update your browser to a recent version or update your Flash plugin.
By VOA
22 January, 2014

Security risks are said to be widespread in the southern Afghan province of Kandahar. Yet the number of women working in Kandahar has risen during the past year.

Jawaid Faisal is a spokesman for Kandahar's governor. Mr Faisal told VOA's Afghan service that the provincial government employs more than 1,150 women, most of them as teachers. That is up from about 900 female teachers last year. 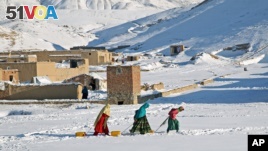 Afghan women drag containers of water on the outskirts of Kabul, Jan. 9, 2014.

Kandahar is the former power base of the Taliban and its leader, Mullah Mohammad Omar, he disappeared in 2001 after United States led forces ousted the Taliban from power.

The Taliban ruled Kandahar from 1994 to 2002. During that period, women were banned from working outside the home, most girls could not attend school and no girls graduated. This year, 500 girls will complete high school.

Mohammad Ewaz Nazari is an education official in the province. He said Kandahar has about 47,000 female students and the numbers are rising.

He described an increasing demand for jobs among both educated and uneducated women. Mr Nazari said 600 illiterate women have asked the government to help them find work. He said the provincial government is attempting to find jobs for these women who can not read or write.

In addition to government positions such as teachers, women are also working for private businesses.

Maryam Durani operates a local radio station, she is also a leading women's rights activist. She won the International Women of Courage Award in 2012, an award given by the American Secretary of State.

Maryam Durani said women in Kandahar need more job opportunities, but she also said they must consolidate, strengthen the gains they have already made.

A non-governmental group, the Afghan School Project has given women year long scholarships that can lead to careers. The recipients attend programs at the Kandahar Institute of Modern Studies. The Institute offers training in Business Management, Information Technology, English and Communications.

Some Afghans have expressed concern that the Taliban could regain power, now that US troops are moving toward the end of fighting in Afghanistan. And they say the progress of women's rights could be lost if that happens.