Update Required To play the media you will need to either update your browser to a recent version or update your Flash plugin.
By Jill Robbins
02 September 2021

The situation threatens to add a hunger crisis to the problems facing the country's new Taliban rulers. They are trying to return the country to a peaceful state after many years of war.

Ramiz Alakbarov is the U.N.'s humanitarian chief in Afghanistan. He said that about one third of the country's population of 38 million does not know if they will have a meal every day.

The UN's World Food Program has brought in food and given it to tens of thousands of people in recent weeks. But winter is coming soon and dry weather is continuing. Alakbarov said at least $200 million is needed urgently to be able to continue to feed the Afghans who are at risk.

"By the end of September, the stocks which the World Food Program has in the country will be out," Alakbarov told reporters at an online news conference. "We will not be able to provide those essential food items because we'll be out of stocks."

Earlier, UN officials said that, of the $1.3 billion needed for overall aid efforts, only 39 percent had been received.

The Taliban militant group seized control of the country ahead of the withdrawal of American forces this week. Now, the group must govern a nation that depends heavily on international aid and is facing an economic crisis that is growing.

In addition to the concerns about food supplies, government workers have not been paid in months. The local currency is also losing value. Most of Afghanistan's foreign currency supplies, which are held in other countries, are currently frozen.

Payenda said the Afghan currency has not sharply lost value because money exchanges have been closed. Its value could drop by more than 100 percent, he added.

Part of the disorder shows the speed at which the Taliban took control of the country. "I did not expect it to be this quickly," Payenda said. "Nobody actually did." 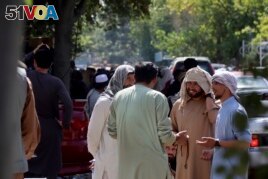 Afghans wait for hours to try to withdraw money, in front of Kabul Bank, in Kabul, Afghanistan, Saturday, Aug. 28, 2021.

Mohammad Sharif, a shopkeeper in the capital, Kabul, said shops and markets there have supplies, but a major concern is rising food prices.

"If the situation continues like this and there is no government to control the prices, that will cause so many problems for local people," he said.

Many Afghans are worried. They are waiting to see how the Taliban will rule. They were very severe when they held power before their fall in 2001.

But more recently, their leaders have tried to show a more moderate image. Schools have reopened to boys and girls although Taliban officials have said they will study separately. Women are out on the streets wearing Islamic head cloths — as they always have — rather than the long burqas that cover the whole face which the Taliban required in the past.

Ambassador Geraldine Byrne Nason is Ireland's ambassador to the UN. Ireland is the current president of the United Nations Security Council. Byrne Nason said Wednesday that the most important test for the new Taliban government will be how it treats women and girls.

The problems Taliban rulers have in rebuilding the economy could give Western nations influence. These nations want the Taliban to meet its promise to form an inclusive government and guarantee women's rights. The Taliban said it wants to have good relations with other countries, including the United States.

Bilal Karimi is an official member of the Taliban spokesman's office. He said Wednesday that a team of Turkish and Qatari technicians arrived in Kabul to help restore operations at the city's airport. Alakbarov, the UN humanitarian official, said the United Nations is asking to use the airport so it can bring food and other supplies to the capital.

The Taliban also must deal with the threat of militants from the Islamic State in Afghanistan group, known as ISIS-K. It took responsibility for last week's bombing at the airport. The Taliban have promised they will not let Afghanistan be used as a base for attacks on other countries.

U.S. Army General Mark Milley is chairman of the Joint Chiefs of Staff. Milley said Wednesday it was "possible" that the U.S. will have to work in agreement with the Taliban on any counterterrorism strikes in Afghanistan in the future.

Kathy Gannon, Rahim Faiez and Edith M. Lederer reported on this story for the Associated Press. Jill Robbins adapted it for Learning English. Mario Ritter, Jr. was the editor.

stock – n. a supply of something that is available for use

burqa – n. a long piece of clothing that covers the face and body and that is worn by some Muslim women in public places

currency –n. the money that a country uses; a specific kind of money

What do you think of the hunger crisis in Afghanistan? We want to hear from you. Write to us in the Comments Section.