Africa, Continent with Monkeypox Deaths, Has No Vaccine

Update Required To play the media you will need to either update your browser to a recent version or update your Flash plugin.
By Dan Friedell
31 July 2022

The health organization said, "there are now more than 16 thousand reported cases from 75 countries and territories and five deaths." The five documented deaths are in Africa, the one continent without a single shot of vaccine against monkeypox. The numbers center on cases of the outbreak since May.

Ahmed Ogwell is the acting head of the Africa Centers for Disease Control and Prevention or Africa CDC. Since the start of 2022, he said, more than 2,100 cases of the disease have been reported in Africa, resulting in 75 deaths. 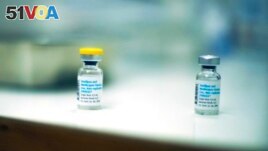 Empty vials of vaccines against Monkeypox lie on a table after being used to vaccinate people at a medical center in Barcelona, Spain, Tuesday, July 26, 2022. (AP Photo/Francisco Seco)

Ogwell noted that the African continent of 1.3 billion people is again being left behind in access to vaccines as it was during the start of the COVID-19 pandemic. He said, "let us get vaccines onto the continent."

Monkeypox has been reported in parts of Africa for many years. But the virus did not spread widely outside the continent. Last May, health organizations began reporting cases of monkeypox in the U.S., Europe and many other countries. That started a rush to get vaccines for the disease.

The European Commission said it will purchase 160,000 doses of the vaccine. And health officials in the U.S. said 800,000 doses will be available to doctors around the country after a few weeks of delays. The two-shot vaccine is manufactured at Bavarian Nordic's plant in Denmark.

But Ogwell said the Africa CDC cannot make similar statements. He said he hopes to have "good news" in the coming days but did not know when the shots would be available. He said smallpox vaccines, which can work against monkeypox, are not available, either.

Ogwell reminded the international health community that unless Africa is safe from disease, "the rest of the world is not safe."

After seeing the international response to the COVID-19 pandemic, with wealthy nations spending money for vaccines and treatments, Ogwell said: "the solutions need to be global in nature."

The WHO said it is creating a vaccine-sharing system for monkeypox, but not much information has come out. In addition, no countries have agreed yet to share vaccines with the WHO.

response–n. something that is done as a reaction to something else

dose –n. an amount of medicine to be taken at one time

access–n. the chance to get something, the availability of an item