Update Required To play the media you will need to either update your browser to a recent version or update your Flash plugin.
By Hai Do
07 October 2021


The African Union's top health official wants to get the world's first approved malaria vaccine to African countries as soon as possible.

This comes one day after the World Health Organization (WHO) said the vaccine should be given to children across Africa to stop the spread of the disease.

John Nkengasong is the director of Africa Centers for Disease Control and Prevention. He told an online news conference Thursday, "We will be engaging with GAVI (the vaccine alliance) and WHO in the coming days to understand first of all the availability of this vaccine."

He noted that by the end of 2021, malaria will likely have killed many more people in Africa than COVID-19 will have.

WHO Director-General Tedros Adhanom Ghebreyesus called it "a historic moment" Wednesday after the health agency's advisory groups approved the use of a vaccine to fight malaria.

Dr. Matshidiso Moeti is the WHO's Africa director. She said, "We expect many more African children to be protected from malaria and grow into healthy adults."

The WHO said its decision was based largely on results from ongoing research in Ghana, Kenya and Malawi. The research followed more than 800,000 children who have received the vaccine since 2019. The WHO said side effects were rare, but sometimes included a high temperature that could result in temporary sudden movements called convulsions. 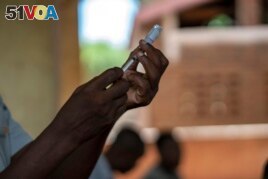 FILE - In this file photo taken Wednesday, Dec. 11, 2019, health officials prepare to vaccine residents of the Malawi village of Tomali, where young children become test subjects for the world's first vaccine against malaria.

The vaccine, known as Mosquirix, was developed by British drugmaker GlaxoSmithKline in 1987. While it is the first to be authorized, the vaccine is only about 30 percent effective. It requires up to four treatments and its protection decreases after several months.

But scientists say the vaccine could have a major effect against malaria in Africa. Most of the world's 200 million cases and 400,000 malaria deaths each year are in Africa.

Julian Rayner, director of the Cambridge Institute for Medical Research, said, "It's an imperfect vaccine, but it will still stop hundreds of thousands of children from dying."

Dr. Alejandro Cravioto is head of the WHO vaccine group that gave the guidance. He said designing a shot against malaria was difficult because it is a parasitic disease spread by insects called mosquitoes.

"We're confronted with extraordinarily complex organisms," he said. "We are not yet in reach of a highly efficacious vaccine, but what we have now is a vaccine that can be deployed and that is safe."

Azra Ghani is chair of infectious diseases at Imperial College London. She said the WHO guidance would hopefully be a "first step" to making better malaria vaccines.

She added that efforts to produce a second-generation malaria vaccine could receive help from messenger RNA technology. The drug company BioNTech recently said it would begin researching for a possible malaria vaccine. The company and its partner Pfizer made one of the most successful COVID-19 vaccines with mRNA.

Hai Do adapted this story from Associated Press and Reuters reports. Mario Ritter Jr. was the editor.

engage with –v.(phrasal) to give serious attention to someone

authorize –v. to give legal or official approval for something

imperfect –adj. having mistakes and problems; not without mistakes

efficacious –adj. having the power to produce a desired result or effect

confront –v. to deal with or face a problem or a danger