Update Required To play the media you will need to either update your browser to a recent version or update your Flash plugin.
By Caty Weaver
22 September, 2016

What began years ago as legislation under then-President George W. Bush will soon be the newest addition to the Smithsonian Institution in Washington.

VOA's Arash Arabasadi was invited the new museum before it officially opened to the public. June Simms has his report.

"What we want is a museum that uses the past to help you understand the world you're living in."

That is Lonnie Bunch III. He serves as curator of the Smithsonian Museum of African American History and Culture.

"This is your story, regardless of who you are. This is a story that tells you about your own family, your own family's struggle of freedom or citizenship..."

"It reshuffles the deck of American history. It's revolutionary."

The story starts with the slave trade that forcibly brought Africans on a long, difficult journey to North America. Jackson notes that African Americans have faced many struggles in the United States. 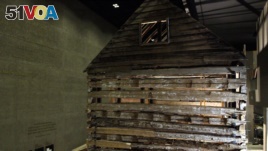 A slave cabin on display in the Smithsonian National Museum of African American History and Culture in Washington.

"It would have been pretty unbearable living within this cabin. If you've ever been down to the South Carolina low country, you'll know that it's very heavy with mosquitos and bugs. It's very hot. When we collected the cabin, snakes came out of the cabin..."

The museum also has reminders of the Jim Crow laws in the southern states. Those laws effectively enforced racial separation and remained in effect into the 1960s.

Supporters described the legal policies as "separate but equal." But, in truth, everything was better for whites. Richard Kurin, Undersecretary of the Smithsonian Institution, provides an example.

"If you were white, you bought your ticket, you walked into this railcar, and you sat in the white section. The white section was a lot nicer than the black section."

The museum exhibits flow through time from slavery to Jim Crow to the civil rights movement and modern times. There are some areas dedicated to music and entertainment, as well as to sports.

Jesse Jackson noted that equality ruled in sports when members of all races were finally permitted to compete.

"Whenever the playing field is even and the rules are public, and the goals are clear, the referees are fair and the score is transparent, we can make it."

"African Americans paved the way through their strategies to assist other groups seeking equality."

President Barack Obama and his wife Michelle are to take part in the opening ceremony at the African American History and Culture museum.

Reporter Arash Arabasadi wrote this report for VOANews. Caty Weaver adapted it for Learning English. George Grow was the editor.

museum – n. a building in which interesting and valuable things are kept and shown to the public

curator – n. someone responsible for organizing things in a museum

regardless – adv. without being stopped by trouble or difficulty

cabin – n. a small, simple house, usually made of wood

dedicate – v. to officially make (something) a place for honoring or remembering a person, event, etc.

referee – n. a person who makes sure that players obey the rules of a game or sport

pave the way – expression begin a process that makes something possible