Update Required To play the media you will need to either update your browser to a recent version or update your Flash plugin.
By VOA
14 August, 2014
51VOA听写整理，转载请注明出处。文本仅供参考，欢迎纠错！

International economists say they are hopeful about Africa's economy. They say economic growth on the continent will increase by as much as five or six percent over the next two years. That would be the continent's highest growth rate since the worldwide economic recession in 2009. 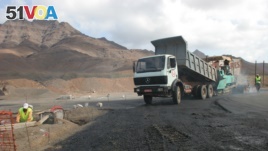 "A lot of people think growth in Africa, they think the only driven by mineral wealth or oil-exporting countries, but we find now the report that even countries that are not resource rich are still growing effectively. This is mainly because of their agricultural sector but also growth in services [including tourism] and a little in manufacturing," said Lusigi.

The report says Africa's top foreign trade partner is Europe. About 40 percent of African trade is with European nations. 25 percent is with Asian countries and about 12 percent is with North America.

The report says African countries traded $81 million worth of goods among themselves in 2012. Much of it is in the making of clothing, leather, building material, farm tools and wood products like furniture.

Angela Lusigi says there's strong demand in Africa for manufactured goods. These include television sets, telephones and other mobile technology. She says many of these products can be made in Africa.

The report says East and West Africa are leading the economic expansion. The report says low inflation especially in energy and food prices is helping economic growth in Africa. And it says African nations have put in place careful economic policies to cut spending and improve tax collection.

And that's the VOA Learning English Economics Report. You can find more stories about economics and other subjects online on our website as well. I'm Mario Ritter.