Update Required To play the media you will need to either update your browser to a recent version or update your Flash plugin.
By VOA
07 May, 2014

African educators and civil society group members gathered recently to discuss the U.N.'s Millennium Development Goals on education. They said a U.N. report shows progress, but they also said some countries cannot meet the goals by the target-date next year.

The educators and other experts said those countries cannot increase education and gain equal treatment for boys and girls in schools by 2015. They noted that this is especially true of sub-Saharan nations. The meeting in Yaounde, Cameroon included experts from 43 African countries.

Jean Pierre Edzoa is an official of Cameroon's Ministry of Social Affairs. He describes the life ahead for uneducated children as a disaster. He says the government is doing everything possible to make parents understand that they harm their children if they do not send them to school. 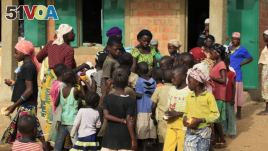 The World Wildlife Fund for Nature is best known for its work for the environment. But it is also helping efforts to increase school attendance. Hanson Njiforti is director of the WWF office in Cameroon. He said it is now centering its efforts on education, because so many children do not go to school.

That sound invites Baka and Mbororo ethnic groups in Central Africa to send their children to school. They still live their traditional lives of their groups and official education is not of top importance for them. Mr. Njiforti notes that the Baka people have been asked for their ideas about how to get children into school rooms.

Bois Waruku is with the group Africa Network Campaign on Education for all. He says the meeting in Yaounde provided a chance to look to the future.

"The sustainable development goals that civil societies have been pushing for is that beyond 2015. Before 2015 world leaders did commit to millennium development goals which were to be achieved by 2015, so a number of the goals that they committed to are coming to and end in 2015. Beyond 2015 what should it be like? " said Waruku.

Beatrice Njenga heads the Education Division at the African Union Commission. She says educators are preparing a 50-year education program for Africa. She says they need financial help and central planning.

"If you want to support Africa, you need to understand Africa's very well articulated vision with priorities in education for 2063 so that all investment is towards a common vision. So unless we actually sit and put in place strategies to achieve what we need to achieve in 50 years, it will be 2063 and we will be still talking about the same thing." said Njenga.

The education experts reported some good news, they said rates of poverty have been decreasing and more children are in school.