Update Required To play the media you will need to either update your browser to a recent version or update your Flash plugin.
By VOA
05 January, 2018


China has made the sale of ivory in the country illegal.

Conservationists have welcomed the decision. They say any legal ivory trade in the world hurts efforts to stop the killing of elephants.

Max Graham is the Chief Executive of the group Space For Giants which works to protect elephants. He said, "There's a new conservation superpower in the world that is taking its responsibilities seriously."

He said that the ban on the ivory trade will support a larger struggle against all kinds of illegal trade in wildlife. The traditional use of wildlife parts in Asia, and especially in China, he said, has been responsible for the loss of "rare species around the world."

China announced the ban at the end of 2016. The measure went into effect in December 2017. Conservationists are pleased about China's decision, but they worry about its enforcement. 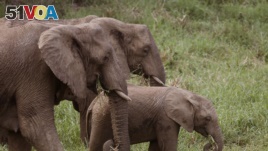 FILE - In this photo taken on Sunday, Dec. 20, 2015, elephant eat grass, inside the Hluhluwe game reserve on the outskirts of Hluhluwe, South Africa.

Frank Pope is the chief of another environmental group, Save the Elephants. He believes the ban could greatly improve the future for elephants. But there is one problem, he says.

"You're going to see secondary markets," he notes. Pope adds that these markets are "...in Vietnam, in Laos, in Myanmar and in Hong Kong. All of these places have markets that have boomed" when China announced its ban.

Philip Muruthi is an official with the African Wildlife foundation. He also welcomes the ban but notes the importance of keeping new markets from growing.

He added that the loss of the elephant population would destroy Africa's wildlife tourism and the jobs that it creates in countries like Kenya and South Africa.

"It's about the African peoples' well-being. It's about our heritage," he said.

Conservationists say that stopping the illegal killing of elephants for their ivory tusks is important, but so is managing their living areas. They urge African governments to do more to reduce threats to wildlife.

ivory – n. a hard white substance that forms the tusks of elephants and other animals with tusks

conservationist –n. a person who works to protect animals, plants and natural resources to prevent their loss

tourism –n. the industry of providing hotels, restaurants and entertainment for people who travel for pleasure

heritage –n. the traditions, history, art and knowledge of a group or nation

tusk – n. a very long, large tooth that sticks out of the mouth of an animal such as an elephant