Update Required To play the media you will need to either update your browser to a recent version or update your Flash plugin.
By Christopher Jones-Cruise
26 January, 2016


The leaders of Zimbabwe and Equatorial Guinea are calling for African nations to have more power and influence at the United Nations.

President Robert Mugabe of Zimbabwe and President Teodoro Obiang Nguema of Equatorial Guinea say the continent should have at least one permanent seat on the powerful U.N. Security Council.

The two leaders spoke during a visit to Zimbabwe by Nguema as they prepare for the meeting of the African Union General Assembly later this month in Ethiopia. 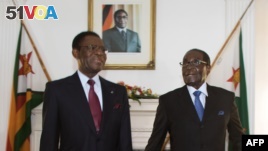 They also spoke about peace, security and terrorism in Africa. And Nguema said African nations must work to become economically independent, just as they have become politically independent.

He said Africa should have two seats on the U.N. Security Council. But the continent should at least have one, he said, with the power to veto, or cancel, resolutions.

"I think that is the revolution which Africa looks for," he said.

Mugabe has served as president of Zimbabwe since 1987; Nguema of Equatorial Guinea since 1979.

The United States, Russia, Britain, China and France have permanent seats on the council, with veto powers. There are also 10 non-permanent members. These nations serve on the Council for two years. They cannot veto resolutions.

Sebastian Mhofu reported on this story from Harare. Christopher Jones-Cruise adapted the report for Learning English. Kathleen Struck was the editor.

assembly - n. a group that makes and changes laws for a government or organization

council - n. a group of people (or nations) chosen to make rule or decisions about something