Update Required To play the media you will need to either update your browser to a recent version or update your Flash plugin.
By Jonathan Evans
28 October 2021


Young scientists in Cape Town, South Africa are working to reverse engineer the Moderna coronavirus vaccine. That means they will carefully study all the vaccine parts to see how it was made so they can make a similar product.

The World Health Organization (WHO) is supporting the effort. It is organizing creation of a vaccine research, training and production center in South Africa, along with a system to gather needed materials. The effort aims to make vaccine treatments available for the world's poorest people.

Emile Hendricks is a 22-year-old scientist for Afrigen Biologics and Vaccines, the company trying to reproduce the Moderna vaccine. He said, "We are doing this for Africa at this moment, and that drives us. We can no longer rely on these big superpowers to come in and save us." 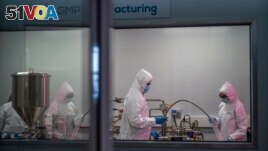 The United Nations COVAX program is working to spread vaccine supplies more evenly across the world. But so far, the effort has failed to ease severe shortages in poor countries. Vaccine donations are far fewer than need demands. And, drug makers have resisted international pressure to share vaccine resources.

The Cape Town center aims to expand access to the new messenger RNA (mRNA) technology that Moderna, Pfizer and German partner BioNTech, used in their vaccines. The WHO has never directly involved itself in attempts to reproduce drug products of private companies that object to such efforts---until now.

"This is the first time we're doing it to this level, because of the urgency and also because of the novelty of this technology," said Martin Friede. He is a WHO vaccine research coordinator who is helping direct the center.

Doctor Tom Frieden is the former head of the United States Centers for Disease Control and Prevention. He says the world is "being held hostage" by Moderna and Pfizer, whose vaccines are considered the most effective against COVID-19.

The United States is demanding that Moderna increase its vaccine production for use in poor nations in exchange for the American financial support it received to develop the product. The worldwide shortage through 2022 is estimated to be between 500 million and 4 billion doses.

David Kessler is the head of Operation Warp Speed, the U.S. program supporting COVID-19 vaccine development. He said the U.S. government has been a very important part in making Moderna the company it is.

"They understand what we expect to happen," Kessler said.

Moderna has promised to build a vaccine factory in Africa at some time in the future. But some poorer countries refuse to wait any longer.

Petro Terblanche is Afrigen's supervising director. She said the company aims to have a version of the Moderna vaccine ready for testing in humans within a year.

"We have a lot of competition coming from Big Pharma. They don't want to see us succeed," Terblanche said. "They are already starting to say that we don't have the capability to do this. We are going to show them."

If the team in South Africa succeeds in making a version of Moderna's vaccine, the information will be publicly released for use by others, Terblanche added.

Mass production of copies of the vaccine could become a property law issue. Moderna has said it would not seek legal action against a company that violated its property rights. However, it also has not offered to help companies that have volunteered to make its mRNA shot.

Moderna leader Noubar Afeyan said the company decided it would be better to expand its vaccine production than to share technology. The company plans to provide billions of additional doses next year.

Lori Hinnant, Maria Cheng and Andrew Meldrum reported on this story for the Associated Press. Jonathan Evans adapted this story for Learning English. Caty Weaver was the editor.

rely – v. to trust in or depend on

novelty – n. something new or unusual