Update Required To play the media you will need to either update your browser to a recent version or update your Flash plugin.
By Caty Weaver
16 August 2022


Africa's national parks are home to thousands of wildlife species such as lions, elephants and buffaloes. The protected areas are increasingly threatened by below-average rainfall and new public systems projects.

The at-risk parks are in Kenya, Tanzania, Mozambique, South Africa, Congo and other countries. 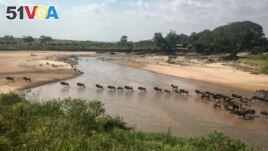 FILE - The annual migration of wildebeest from the Serengeti National park in Tanzania to the Maasai Mara national reserve in Kenya is seen from a drone in the Maasai Mara, July 22, 2020. (AP Photo/Joe Mwihia, File)

The parks not only protect plants and animals. They also act as natural carbon sinks. This means they store carbon dioxide and help reduce the effects of global warming.

An estimated 38 percent of Africa's biodiversity areas are under severe threat from climate change and infrastructure development, said Ken Mwathe. He is with the organization BirdLife International.

Investors see the areas as ready for development, Mwathe said, adding the governments have some responsibility for that. Governments have opened "the land in these areas for infrastructural development" he said.

African nations are seeking to raise living standards and meet sustainable development goals, including access to clean water and food, economic growth and improved public education. The effort leads some governments to start large building projects. Many of them are through foreign investments, especially from China.

The proposed East African Oil Pipeline is an example. Uganda's government says the project can help lift millions out of poverty. However, the plan calls for the pipe to run through Uganda's Kidepo Valley, Murchison Falls and Bwindi Impenetrable Forest. Such plans threaten species and have drawn criticism from climate campaigners.

Population growth and the construction that comes with it have also added to the pressure on parks, conservationists said. But they add that replacing wildlife with infrastructure is the wrong way for economic growth.

"We have to have a future where wildlife is not separated from people," said Sam Shaba. He is the program manager at the Honeyguide Foundation, an environmental non-profit organization in Tanzania.

When "people start to see that living with wildlife provides the answer to sustainable development ... that's the game-changer," Shaba said.

Most of Africa's wildlife parks were created in the late 19th and early 20th centuries by colonial rulers. They fenced the areas and ordered local people to stay out.

But now conservationists are seeking more inclusive policies for operating the parks. They seek the expertise of Native communities that live around the parks and can help protect them, said Ademola Ajagbe. He is the Africa regional managing director of The Nature Conservancy.

The peoples of these areas are forced to move "such as the Maasai (in Tanzania and Kenya), Twa and Mbutis (in central Africa) who for generations have lived with wildlife," said Simon Counsell. He is an advisor with Survival International.

"Africa is depicted as a place of wildlife without people living there and this needs to change," he said.

The effects of worsening weather conditions in national parks due to climate change should also not be ignored, experts said.

A recent study carried out in South Africa's Kruger National Park linked extreme weather events to the loss of plants and animals.

Drought has seriously threatened species like rhinos, elephants and lions as it reduces the amount of food available, said Philip Wandera. He is a former officer with the Kenya Wildlife Service now teaching conservation at the Catholic University of East Africa.

He added that financial help to "support communities in and around parks" would also help protect them.

drill – v. to bore or drive a hole in

biodiversity – n. biological diversity in an environment as indicated by numbers of different species of plants and animals

infrastructure – n. the system of public works of a country, state, or region

standard – n. something set up as a rule for measuring or as a model

sustainable – adj. of, relating to, or being a method of harvesting or using a resource so that the resource is not depleted or permanently damaged

access – n. permission, liberty, or ability to enter, approach, or pass to and from a place or to approach or communicate with a person or thing

construction – n. the process, art, or manner of building something

management – n. the act of looking after and making decisions about something