Update Required To play the media you will need to either update your browser to a recent version or update your Flash plugin.
By Christopher Jones-Cruise
04 December, 2016


A report about a new public opinion survey shows that a ten-year-long period of Africans demanding democracy has recently ended, and such demands have been declining since then in the 16 countries the survey has regularly examined.

The report is called Do Africans Still Want Democracy? It was written by Afrobarometer, an African, non-partisan research network. Researchers spoke with people in 36 African nations about their political beliefs.

Robert Mattes wrote the report. He is a political studies professor and the director of the Democracy in Africa research group at the University of Cape Town. He is also a visiting scholar at Princeton University. He says he wanted to know if Africans want to live in a democracy or if they prefer military rule, one-party rule or a strong man who does not have to worry about elections and legislators. The survey found overall support for democracy was 46 percent. 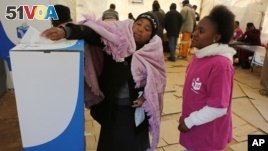 A woman casts her vote at a polling station in Soweto, South Africa, Aug. 3, 2016. A recent report questioned whether Africans still want democracy.

"...and that is a significant downturn from our last surveys -- which we did in 2013, 2014 -- in which support for democracy in Africa, or demand for democracy, had reached a high point of 51 percent."

Mattes says the survey found that the more educated people are, the more likely they are to support democracy.

"They use new media at high rates (and) they engage with the political process. And they often have a more procedural view of democracy -- they learned about it in school as elections, about legislatures, about representation, about rights and liberties."

Mattes says people support a democracy only if it helps them economically and politically. And he says support for democracy depends upon elections being free and fair.

"...where elections are seen by people as completely aboveboard and with a high level of public integrity, demand has maintained or even increased. But where large (a) large percentage of the people have doubts about the integrity of the election, demand for democracy has dropped precipitously."

Professor Mattes says a country's political system can be harmed if a political party refuses to accept the results of an election.

The survey found the demand for democracy is higher in urban areas and among those with a high school or university education. Middle-class business people and professionals and those who work in offices also had a higher level of support for democracy.

"That is the group we think have been rising in Africa over the last five to 10 years with the sustained growth that many countries had. People with a job are much more likely to support democracy than people who are partially employed or unemployed."

The report notes that Africa is far more democratic than it used to be. It says "more than half of all Africans today live in functioning multiparty electoral democracies that are demonstrably freer than were the military or one-party regimes that previously dominated the continent."

downturn – n. a situation in which something (such as business or economic activity) decreases or becomes worse (usually singular)

procedural – adj. describing a series of actions that are done in a certain way or order; an established or accepted way of doing something

precipitous – adj. happening in a very quick and sudden way

sustain – v. to provide what is needed for (something or someone) to exist, continue, etc.