US Expulsions of Africans Rising, But Still Less Than Other Immigrant Groups

Update Required To play the media you will need to either update your browser to a recent version or update your Flash plugin.
By Christopher Jones-Cruise
21 May, 2017


The United States has expelled about 326 Somali nationals since January.

That number is greater than the total for all Somalis expelled from the country in 2016.

This is the third consecutive year in which the number of Somalis deported by the U.S. government has risen. The rising numbers have increased immigrants' fears of raids, detentions and deportations. 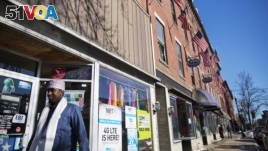 U.S. flags hang outside businesses started by African immigrants who have settled in Lewiston, Maine, March 17, 2017.

The deportations of Somali citizens appear to be part of a larger movement, according to the Transactional Records Access Clearinghouse at Syracuse University. It found that in the first three months of 2017, the U.S. government ordered the deportation of more than 1,200 Africans. Citizens of Ghana, Nigeria, Somalia and Kenya have received the most removal orders.

Recent deportation orders are undoing a ten-year-long trend. From 2006 to 2016, the number of Africans deported every year fell from 2,100 to about 1,000. If the trend continues, four times more Africans will be deported by the end of this year than during 2016.

Last week, the U.S. government expelled 67 Somali nationals. That was the third time Somalis were deported in 2017. But even with the recent increase in Somalis deported, the rate at which they are removed is still less than half the average for all immigrants.

Generally, immigrants from African countries are much less likely to be removed from the United States than other immigrant groups.

People from Africa represented less than 0.4 percent of individuals deported from the United States in 2016. That is partly because most immigrants moving to the U.S. are from non-African countries.

The Pew Research Center notes that in 2015 less than five percent of all immigrants to the U.S. were from Africa.

Compared to all nationalities, citizens of African countries are about 10 times less likely to be deported. In 2016, one of every 1,087 African immigrants was deported from the United States. That year, one of every 94 foreign citizens was removed. Those numbers come from the Pew Research Center, the Migration Policy Institute and the U.S. Census Bureau.

Last week, the Immigrations and Customs Enforcement agency (ICE) reported that on April first 4,801 Somali nationals had received final orders of removal. The U.S. government had delayed deportations of Somalis because of a civil war in the country. But in 2012, officials decided Somalia was stable enough that Somalis in the U.S. illegally could be safely returned to their homeland.

Immigrants face deportation when they are found guilty of crimes. But deportations of non-criminal immigrants are more common. Some of those removed last week had asked for asylum, but were denied.

Hundreds of African refugees have been resettled in the United States this year. They include 1,679 refugees from Somalia and 334 from Sudan. Both countries are named in President Donald Trump's executive orders limiting travelers and immigrants from some majority-Muslim countries for 90 days. But federal judges have blocked enforcement of those orders. The Trump administration has appealed to higher courts to overrule the judges.

consecutive – adj. following one after another