Update Required To play the media you will need to either update your browser to a recent version or update your Flash plugin.
By Bruce Alpert
08 December, 2016


Ask many actors and they will tell you it is hard to get work when you are just starting out and also as you get older.

That has not been the case for American musical actress Susan Watson.

In 1958, Watson was offered a part in the musical, "West Side Story," in London. At that time, she was still a student at New York City's Julliard School for musicians, dancers and actors.

More than 50 years later, she was offered another part. Watson was to take an important role in a remake of the musical, "Follies," at the Kennedy Center in Washington and the Marquis Theatre in New York City.

In both cases, the offers came from musical theater legend Stephen Sondheim. He wrote the lyrics for "West Side Story" and the music and lyrics for "Follies." 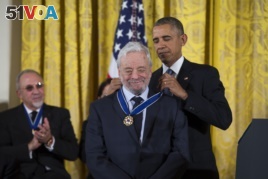 President Obama awards Medal of Freedom to Stephen Sondheim in 2015.

"It felt so good being on stage nightly with fellow ‘senior citizens,' Bernadette Peters, Linda Lavin and Elaine Paige," Watson said of "Follies."

"Active, empowered senior women are a resource that I think Americans can be proud of."

As a teenager, Watson developed her dancing, singing and acting skills in her home town of Tulsa, Oklahoma.

She traveled to study at New York's Julliard School before Sondheim interrupted her studies with the offer of a part in "West Side Story." The award-winning musical, based on William Shakespeare's "Romeo and Juliet," tells a story of the struggles of immigrants in New York City.

Watson later had starring roles in such well-known musicals as "The Fantastics," "Bye Bye Birdie," "Carnival," "Celebration" and "No, No, Nanette." She has also appeared in many American television shows.

Now, musical theater is regularly shown in such countries as Australia, China, Israel, Japan, Germany, Spain, the Netherlands, and South Korea. American musicals have been popular for many years in Britain and Canada.

The end of a performance, when the stars of a show come out to a "curtain call," to accept cheers from the people watching, never gets old, Watson said.

The Theatrical Slap that Hurt

In live theater, actors know the unexpected will happen -- it is just a question of when.

Watson remembers how her co-star in the musical, "Carnival," the late Jerry Orbach, liked to give as realistic a performance as possible.

There was one scene, Watson recalled, where Orbach was supposed to slap her. "I'm a small person, and he was slapping me a little too hard," she said. Watson said she asked him to lighten up, but if he did, it was not nearly enough for Watson.

"So in one performance, I hit him back hard," Watson said. After that, Watson's co-star let up on their nightly hitting scene. That was important for her.

Actors in Broadway shows in New York City do eight performances a week.

Watson's Strong Voice a Surprise to Some

John Wilson, writing for The New York Times in 1976, said a Susan Watson performance produced "shock value." It surprised people that a small woman had such a "big full-bodied voice," Wilson wrote.

At age 78, Watson now lives in California, but she is not finished performing. She just released a new album of musical theater and other American music called, "The Music Never Ends." She is excited that six of the 14 songs on her new album were written by "empowered women," including Nancy Ford and Gretchen Cryer.

Some people have the opinion that it is harder to get started in the entertainment business. But Watson said today's computer technology makes it easier to tell people about new shows, recordings and movies.

Performers, musicians, television networks and theaters can tell the world "about their creative efforts" by placing messages on the internet and social media, Watson said.

She said her new musical recording, "The Music Never Ends", is selling "very well" partly because people do not have to go to a store to buy it. They can buy it online, like almost any other product.

Susan Watson dancing in "Follies" at Washington's Kennedy Center in 2011.

We want to hear from you. Write to us in the Comments Section and share your views on 51VOA.COM. Have you ever thought about being an actor? How hard do you think it will be to succeed?

legend - n. a famous or important person who is known for doing something extremely well

interrupt - v. to cause someone to stop doing what they had been doing

curtain call - n. at the end of a show, when actors appear on stage to accept the cheers of the audience

slap - v. to hit someone