After a Year Learning from Home, Many Children Go to Summer School

Update Required To play the media you will need to either update your browser to a recent version or update your Flash plugin.
By Susan Shand
15 June 2021


After her three children were vaccinated, Aja Purnell-Mitchell asked them what they wanted to do for the summer. 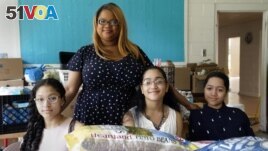 The family lives in Durham County, North Carolina, where school buildings shut in March 2020, the start of the COVID-19 crisis. Students have been in distance-learning since then.

"Getting them back into it, helping them socialize back with their friends, maybe meet some new people, and, of course, pick up the things that they lacked on Zoom," she said.

Zoom is an online video system. Many teachers in the United States used it and similar sites to teach their students at home.

Communities across the U.S. are preparing for increased interest in summer education programs. They have expanded offerings and are paying teachers more than usual to work over the break.

The most recent federal COVID-19 bill provides billions of dollars in aid to states. The Biden administration is requiring them to use some of it for widening their summer programs.

The U.S. Department of Education said it is too early to know how many students will go to classes this summer. The number, however, is sure to be higher than the estimated 3.3 million who attended in summer of 2019.

The city of Philadelphia, Pennsylvania had enrolled 14,700 by Friday and was expecting more to come. Last summer, just 9,300 students attended the offered online classes.

"It's an understatement to say the needs are greater this year," said Kalman Hettleman. He is an education policy expert in Maryland.

Hettleman worries most about the reading skills of poorer, younger students. Many were having problems before schools closed. Now, after a year at home, they will have fallen even further behind.

Hettleman said, "It's not realistic to think that summer school, no matter how good or intense, will close all the gaps...."

He wants to see required summer school, as well as special classes during the next school year, for many children in Baltimore, Maryland's largest city.

"It will help. It will at least give them a fighting chance," he said.

Taylor Dennington is starting high school. She is a good student and never thought she would be in summer school. She and her many friends are pleased to be in school for the summer.

"This year was such an unmotivating school year," she said.

Dennington is studying biology and math.

"I learn better in school than online. Being in a classroom where a teacher is present is so much better than waiting hours for an email back from your teacher," she told The Associated Press.

Purnell-Mitchell's children will have five or six weeks of full-time school. It will include sports and music. Some communities will also receive free transportation and meals.

In North Carolina, more than 25 percent of school children, about 200,000, are thought to be in danger of falling behind. The state recently passed a law giving those children priority for summer school. Some communities in other states are simply opening schools for all their students.

School systems must spend some of the federal money to help poor students and students whose first language is not English. Children of minority groups and children who are homeless also take priority.

The expanded summer schools around the country have greatly increased the need not only for teachers but for bus drivers and others who work in school buildings.

Some North Carolina teachers will get a $1,200 bonus, or special pay. There are also bonuses for teachers whose students show improvement in reading and math.

In Anderson, South Carolina, the school system has increased teachers' pay to $60 per hour, a 100 percent increase. Other towns are also increasing teachers' pay.

Connecticut is promising $4,500 payments to 500 college students who will teach at summer schools.

New York City has the country's largest school system, with over 1 million children. It is offering summer school to all students.

"They need our support as we build a recovery for all of us," said Mayor Bill de Blasio when he announced the plan.

Back in North Carolina, Purnell-Mitchell said her children missed their teachers and friends. They were lonely and disliked learning at home. Now, they are pleased to be going to summer school.

enroll - v. to become a member or participant

deadline - n. a date or time when something must be finished

gap - n. a hole or space where something is missing

motivate - v. to give (someone) a reason for doing something