After Apollo Anniversary, NASA Prepares for Return to Moon

Update Required To play the media you will need to either update your browser to a recent version or update your Flash plugin.
By Ashley Thompson
02 August, 2019


The American space agency NASA recently marked the 50th anniversary of the 1969 Apollo 11 moon landing. For some, the celebrations were a reminder that the program has not been to the moon since 1972.

But NASA aims to change that -- soon. 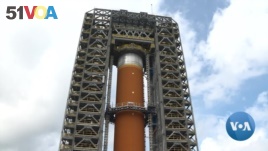 NASA's plans are taking shape in places like Huntsville, Alabama. That is where you will find NASA's Marshall Space Flight Center. Inside, engineers and other experts are working on building and testing a new Space Launch System, or SLS.

Jody Singer is the center's director. She says the launch system is the "key enabler" to going to the moon.

"The Space Launch System is the only rocket capable of sending a fully equipped Orion, the astronauts, the supplies and the systems to the moon in one launch, and taking us deep into space," Singer said.

The Orion is one of NASA's spacecraft.

Mike Nichols is a lead testing engineer at the center. He has worked with NASA for over 20 years. On one recent day, he spoke with VOA about testing a new liquid hydrogen tank.

Nichols said, "In order to prove that it's strong enough to survive launch, they build this structural test article, send it to us, we install it in the test end."

NASA historian Brian Odom explains that the liquid hydrogen tank is just one piece of the larger SLS system. Another is a large metal container for liquid oxygen, he explains.

"The work you see in the background is for the liquid oxygen -- the oxidizer for that SLS vehicle -- to see if it's going to be able to withstand those pressures, those intense dynamics at launch.

"And so far, everything is looking good."

NASA's new moon program is called "Artemis." The first mission is set for next year, without a crew. Artemis 2 plans to send astronauts around the moon in 2022.

Artemis 3 is expected to touch down on the moon's south pole in 2024.

If the testing works out, all of the missions will begin their trips to the moon on top of the new SLS system.

Jody Singer says NASA has set its sights on newer, bigger and more difficult goals than ever before.

"So we're all working very hard to land the first woman and the next man on the moon by 2024, and take what we learn and do it and apply to future missions, such as missions to Mars."

NASA is not the only program with big goals. Private companies such as Boeing and Space X are developing vehicles to take astronauts into Earth orbit and to the International Space Station.

China's national space program has also announced a big goal. It aims to land a crew on the moon in the next 10 years.

enabler - n. something that makes something able to do something

install - v. to make (a machine, a service, etc.) ready to be used in a certain place

dynamics - n. the science that studies motion and the forces that cause or stop motion