Update Required To play the media you will need to either update your browser to a recent version or update your Flash plugin.
By Bryan Lynn
22 February 2021


Boeing is urging air travel companies to suspend the use of all the company's 777 passenger jets with one kind of engine model.

The move comes after an incident that took place Saturday. A Boeing 777's engine blew apart during a United Airlines flight shortly after takeoff. The airplane landed in the U.S. city of Denver with all passengers safe.

Boeing urged airlines to suspend use of all 777s with the same kind of engine. It is called the Pratt & Whitney 4000-112. Most airlines flying planes with those engines said they would temporarily suspend their use.

The U.S. Federal Aviation Administration (FAA) said in a statement it was calling for increased inspections of 777s using the Pratt & Whitney 4000-112 engines.

Boeing said 69 aircraft with that kind of engine were in service. Another 59 planes were in storage.

The FAA said United Airlines is the only American-based airline using planes with the Pratt & Whitney 4000-112 engine. The company said on Sunday that it had voluntarily removed from service 24 active 777 planes with that engine. 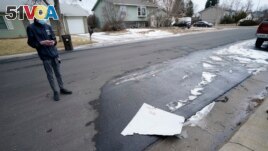 A man looks over debris that fell off a plane as it shed parts over a neighborhood in Broomfield, Colo., Saturday, Feb. 20, 2021. (AP Photo/David Zalubowski)

Two Japanese airlines – Japan Airlines and ANA – announced they had suspended the use of all 777 aircraft with the engines. South Korea's Asiana Airlines also grounded its planes, while Korean Air said it was discussing whether to suspend use of the aircraft.

Boeing said it was working with regulators in the U.S. and other countries to examine the planes. They are to be examined by inspectors from engine maker Pratt & Whitney.

The weekend emergency landing of the United plane was the latest trouble for Boeing. The company's 737 Max planes were grounded, or barred from flying, for more than a year after two deadly crashes in 2019. The Max planes began returning to service late last year, but the company lost billions of dollars during the flight ban. Boeing has also suffered from major drops in air travel related to the coronavirus pandemic.

Video posted on Twitter from Saturday's emergency showed the engine on fire as the plane flew through the air. Other pictures posted on social media appeared to show a broken fan blade in the engine.

Passengers, who were on their way to Hawaii, said they feared the plane would crash after they heard an explosion and saw a bright flash of light. The explosion, which could be seen from the ground, left a cloud of black smoke in the sky.

People on the ground saw large pieces of the aircraft fall. One piece narrowly missed hitting a home, The Associated Press reported.

The U.S. National Transportation Safety Board said two of the engine's fan blades were broken and the remaining blades showed damage.

Japan's Ministry of Land, Infrastructure, Transport and Tourism said an engine in the Pratt & Whitney 4000 family suffered trouble on a Japan Airlines 777 flying to Tokyo from Naha on December 4.

The airline has said the plane had engine difficulties after takeoff and returned to Naha. An inspection showed damage to the engine's structure and missing fan blades, Japan Airlines said. Increased inspection methods were ordered as a result of the incident.

The Associated Press and Reuters reported this story. Bryan Lynn adapted the reports for Learning English. Mario Ritter, Jr. was the editor.

regulator – n. an official who works for the part of government that controls a public activity by making and enforcing rules