After Harvey, a Long Road to Recovery for Houston Schools

Update Required To play the media you will need to either update your browser to a recent version or update your Flash plugin.
By Phil Dierking
12 September, 2017


Now is the time that students and teachers are supposed to be beginning a new year together. But those affected by Hurricane Harvey, which struck Texas earlier this month, have to change their plans.

The hurricane damaged an area more than 480 kilometers along the Gulf Coast. It affected more than 1 million students and 220 school districts.

Officials in many of those districts are still examining their properties to see if people can even come on campus.

In Houston, the largest school district, the superintendent says he is bringing in crisis counselors to help students traumatized by the storm. The hurricane poured more than 100 centimeters of water on the city.

Superintendent Richard Carranza added that employees have also been affected by the storm.

"They have lost everything and [are] coming to work and expected to provide support and encouragement to students," Carranza said.

He said it does not matter how well you plan for an emergency.

"The true impact of a situation of this magnitude is something that no one can really plan for." 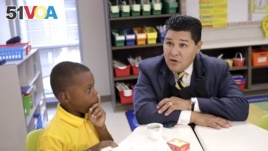 Some school leaders who have survived similar disasters are sharing their advice. Kerry Sachetta is the assistant superintendent for operations in Joplin, Missouri. Sachetta's school district was destroyed by a tornado in 2011.

She says the first priority is safety.

"You have to first take care of your own situation before you can help someone else," Sanchetta said.

Frank Scarafile is the superintendent of the Little Ferry school district in New Jersey.

In late October 2012, most of Little Ferry was underwater after a nearby river overflowed. The flood caused nearly $6 million in damages to the district's two buildings. The district closed for two weeks.

Scarafile said that once his students were back in school, teachers looked for signs of trauma.

"When you had a really bad rainstorm afterwards, their fear was that they were going to get flooded again," Scarafile said. "They were afraid. That was part of getting displaced...that was part of losing everything. There was a lot of anxiety."

Robert Romines is the superintendent in Moore, Oklahoma. He agrees that after a natural disaster, mental health should become a priority for school leadership. Mental health is especially important for communities where children may be experiencing death and trauma for the first time, he said. 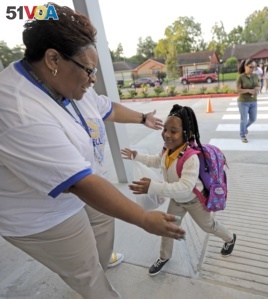 Angela Stallings is the associate superintendent for the Pasadena Independent School District near Houston. One of their high schools was used as an emergency shelter during the storm.

Stallings said that she is already hearing about students' feelings of anxiety. Her district will be offering counselors for a long time, she said.

Carol Salva teaches English-language development in the Spring Branch district in Houston. She spent a few tense days at home with two of her children, ages 10 and 13, before finally deciding to evacuate.

Her neighborhood did not have an order to leave. However, her home would have been in the "path of destruction" if one of the nearby dams broke. Neighbors were leaving, and helicopters were rescuing some people in nearby neighborhoods.

"It's just very scary to live so close to those reservoirs that you're seeing on the news," she said.

Salva finally left the neighborhood three days after the storm. She is already thinking about how to discuss the disaster once she returns to school. She is especially worried about how the storm affected some of the refugees who had recently settled in the area. 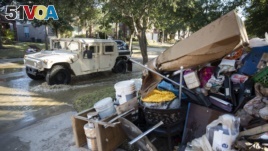 A military vehicle passes flood-damaged belongings piled on a homeowners' front lawn in the aftermath of Hurricane Harvey at the Canyon Gate community in Katy, Texas, Sept. 7, 2017.

Hurricane Harvey will also affect students who do not go to school in places struck by the storm. Their districts will have to accept children who can no longer return to their schools.

Last week, the Austin, Dallas, and San Antonio districts were preparing to take in displaced students. People throughout the region were offering services and support to help them.

Superintendent Nicholas Gledich, whose district suffered a forest fire in 2012, knows the impact a natural disaster has on all communities. "You know in your heart and your mind that Houston needs support and resources," said Gledich. "But let me tell you, those other districts will need resources too."

This story was originally written by Francisco Vara-Orta and Denisa R. Superville for Education Week (edweek.org). Phil Dierking adapted it for Learning English using other media, with permission from Editorial Projects in Education. Kelly Jean Kelly was the editor.

What do you think the most important steps are for school districts after a natural disaster? We want to hear from you. Write to us in the Comments Section or on 51VOA.COM.

displace - v. to force people or animals to leave the area where they live

traumatize - v. to cause (someone) to become very upset in a way that often leads to serious emotional problems

tornado - n. a violent and destructive storm in which powerful winds move around a central point

encouragement - n. the act of making something more appealing or more likely to happen

magnitude - n. the size, extent, or importance of something

prescribe - v. to make something an official rule

reservoir - n. a usually artificial lake that is used to store a large supply of water for use in people's homes, in businesses, etc.

superintendent - n. a person who directs or manages a place, department, organization, etc.

trauma - n. a very difficult or unpleasant experience that causes someone to have mental or emotional problems usually for a long time