After Red October, Not a Lot Has Changed in Russia

Update Required To play the media you will need to either update your browser to a recent version or update your Flash plugin.
By Hai Do
24 October, 2017

The raid started the Bolshevik Revolution, also called the Red October revolution. It led to the ouster of Czar Nicholas II, and the creation of the Soviet Union.

The Reuters news agency notes that Wednesday marks the 100th anniversary of the attack, based on Russia's old calendar. But not a lot has changed over the past century, in terms of the Russian economy. 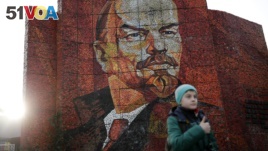 Renaissance Capital is an investment bank specializing in the country. It says the Russias of 1917 and 2017 have more in common than might be expected.

For example, before the Red October revolution, about a third of Russian debt was held by foreigners. That is the same as the rate today.

Before 1917, foreigners earned dividend rates of five to eight percent from shares of Russian utility stock. The dividend rates from such shares are the same today.

One hundred years ago, Russia had less industry than major world powers. It was considered to have the same level of industrialization as Brazil and Mexico. That is generally true today.

Raw materials were Russia's main exports before the 1917 revolution. It is still at the same two-thirds level a century later.

This is not to say that nothing has changed.

More Russians now have the ability to read and write as compared to those living before the Soviet Union. And the country became more industrial during the Soviet years.

Charlie Robertson is an economist with Renaissance Capital. He told the Reuters news agency that the Soviet years stopped the development of a modern Russian economy.

In the first half of the 20th century, Russia was catching up to industrialized nations like Italy and Japan.

Robertson added, "If that progress could have been maintained ... Russia would be more populous, more wealthy and more democratic than it is today."

Hai Do adapted this story for Learning English based on a Reuters story by Jeremy Gaunt. George Grow was the editor.

old calendar - n. Russia, and the old Soviet republics, adopted the Gregorian calendar in 1918. But the Russian Orthodox Church continues to use the old Julian calendar.

dividend - n. an amount of profits pays to people who own stock

raw - adj. in a natural state