Update Required To play the media you will need to either update your browser to a recent version or update your Flash plugin.
By Bryan Lynn
02 March, 2019


China has proposed new rules for gene editing and other "high risk" biomedical technologies. The proposals come three months after a Chinese researcher was widely criticized after claiming he had created the world's first genetically-edited babies.

A draft of the measures was published this week on the website of China's National Health Commission. The new rules would cover gene editing, stem cell experiments and biological products created for the human body, the Chinese government-supported Global Times newspaper reported. 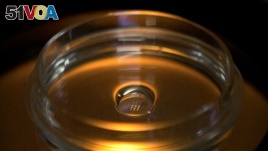 In this Oct. 9, 2018 photo, a microplate containing embryos that have been injected with Cas9 protein and PCSK9 sgRNA is seen in a laboratory in Shenzhen in southern China's Guangdong province. (AP Photo/Mark Schiefelbein)

Violations of the rules would result in punishment for medical organizations or individuals, the draft proposal said. Punishments could include large fines or a ban on future research. Individuals could also face criminal prosecution.

These rules come after Chinese researcher He Jiankui reported last November that he had helped make the world's first genetically edited babies. He said he had edited – meaning changed – the genetic material of two human embryos. The embryos developed into twin girls, who were born.

He Jiankui said he had performed the gene editing to help protect the babies from infection with HIV, the virus responsible for the disease AIDS. He said the process had "worked safely" and the two girls were "as healthy as any other babies."

His claims were quickly condemned by members of the world scientific community, who denounced them as "irresponsible." The Chinese government ordered a halt to the work soon after news media reported on the experiment.

This kind of gene editing is banned in the United States and many other countries. Such changes to a person's DNA can pass to future generations and risks harming other genes.

He Jiankui spoke to a reporter with The Associated Press the month before his project was made public. At the time, he said he believed gene editing of human embryos resulting in live births was legal in China. The country had no law specifically banning it.

But China's official Xinhua News Agency reported last month He Jiankui had broken national guidelines and would be punished for any legal violations. Xinhua did not specify which laws were violated, but noted he had created a false ethical examination.

Along with the twins, another embryo yet to be born reportedly resulted from He Jiankui's experiment. All three are to remain under medical observation with regular visits from government health department officials, Xinhua reported.

Bryan Lynn wrote this story for VOA Learning English, based on reports from the Associated Press and Global Times. Kelly Jean Kelly was the editor.

Do you think gene editing and stem cell experiments should be subject to government rules? Write to us in the Comments section, and visit 51VOA.COM.

draft – n. a plan or proposal that has not yet reached its finished form

manage – v. be in control of a project, company, team, etc.