Update Required To play the media you will need to either update your browser to a recent version or update your Flash plugin.
By Bryan Lynn
23 October 2022


The American space agency NASA says its Curiosity vehicle has reached its next exploration target on Mars.

The explorer, or rover, reached an area that NASA scientists call Mount Sharp. The area sits within the planet's Gale Crater, which Curiosity has been exploring since landing on Mars in 2012. Mount Sharp contains a mix of rocky material and many large hills.

In the past, researchers have found evidence that, billions of years ago, Mount Sharp contained many water systems. At some point, scientists believe the Martian climate grew more extreme and caused the water systems to dry up. 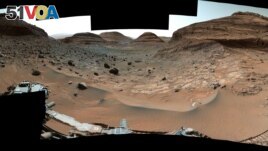 NASA's Curiosity Mars rover used its Mast Camera, or Mastcam, to capture this panorama while driving toward the center of this scene, an area that forms the narrow "Paraitepuy Pass," on Aug. 14, the 3,563rd Martian day, or sol, of the mission. (NASA/JPL-Caltech/MSSS)

Today, Mars is an extremely cold desert that cannot support any running water systems. Experiments carried out on the minerals could help researchers learn more about the kinds of life that may have existed on Mars when it had conditions more similar to Earth.

NASA currently operates two rovers on Mars. The other vehicle, Perseverance, landed in February 2021. It is exploring areas around the planet's Jezero Crater. The space agency estimated the landing site for Perseverance was about 3,700 kilometers away from where Curiosity touched down. NASA also operates the InSight lander on Mars.

NASA said in a statement that the minerals around Mount Sharp were first discovered by the agency's Mars Reconnaissance Orbiter, years before Curiosity landed. Scientists have been waiting a long time to get a closer look.

Shortly after arriving in the area, Curiosity's instruments discovered a wide range of different rock kinds and sizes. Among the findings were several different salt materials that suggest past signs of water in the area, NASA says.

To examine rocks, Curiosity uses a drill at the end of its robotic arm to dig into the Martian surface. The rover has already drilled many holes on Mars. The latest drilling happened on October 3.

The Curiosity team chose a rock it named "Canaima" for the operation. The rover has recently experienced problems with a braking system that permits the robotic arm to mostly stay in place. NASA said this can cause difficulties during drilling. But it reported that Curiosity's 36th drill hole was a success.

The team of scientists are now looking forward to examining the latest Martian dust collection.

The space agency noted that Curiosity's path to Mount Sharp included areas containing "treacherous," or risky, areas. In August, the rover safely made its way through a sandy area situated between high hills. Sand presents a major risk for Curiosity because of the chance of getting stuck.

Sharp rocks can also damage the rover's wheels. Ground-based rover drivers "need to carefully navigate these areas," NASA said. The agency noted that it took Curiosity more than a month to reach its target area.

After reaching its goal, however, the team was treated with some of the best images ever taken by the rover. Curiosity's so-called Mastcam was able to capture extremely wide, or panoramic, views of the Martian surroundings.

"We would get new images every morning and just be in awe," said Elena Amador-French. She oversees work by Curiosity's science and engineering teams at NASA's Jet Propulsion Laboratory in California. "The sand ridges were gorgeous," she added. "You see perfect little rover tracks on them. And the cliffs were beautiful – we really got close to the walls."

Last month, NASA celebrated Curiosity's 10th anniversary in service. During that time, it said the rover has driven nearly 29 kilometers and climbed about 625 meters while exploring Gale Crater.

crater – n. a big hole in the ground created by the force of an object

drill – v. to make a hole in a hard substance using a special took called a drill

brake – n. a part of a machine that stops or slows the movement of something

navigate – v. to find the right direction to travel by using maps and other equipment

awe – n. a feeling of great respect for someone or something