What Is the Relationship Between Age and Happiness?

Update Required To play the media you will need to either update your browser to a recent version or update your Flash plugin.
By VOA
29 May, 2012

Are people less happy or more happy the older they get? If you answered more happy, then you were right, based on a study published two years ago. It found that people generally become happier and experience less worry after age fifty. In fact, it found that by the age of eighty-five, people are happier with their life than they were at eighteen.

The findings came from a Gallup survey of more than three hundred forty thousand adults in the United States in two thousand eight. At that time, the people were between the ages of eighteen and eighty-five. 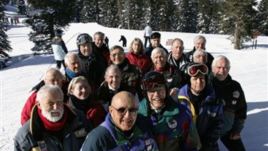 A group of retirees in Alta, Utah, enjoy skiing and happiness together in this file photo.
Arthur Stone in the Department of Psychiatry and Behavioral Science at Stony Brook University in New York led the study. His team found that levels of stress were highest among adults between the ages of twenty-two and twenty-five. Stress levels dropped sharply after people reached their fifties.

Happiness was highest among the youngest adults and those in their early seventies. But the people least likely to report feeling negative emotions were those in their seventies and eighties.

The survey also found that men and women have similar emotional patterns as they grow older. However, women at all ages reported more sadness, stress and worry than men did.

The researchers also considered possible influences like having young children, being unemployed or being single. But they found that influences like these did not affect the levels of happiness and well-being related to age.

So why would happiness increase with age? One theory is that, as people get older, they become more thankful for what they have and have better control of their emotions. They also spend less time thinking about bad experiences.

The findings appeared in the Proceedings of the National Academy of Sciences.

Happiness is not the only thing that apparently improves with age. In a study published this year, people in their eighties reported the fewest problems with the quality of their sleep.

Researchers surveyed more than one hundred fifty thousand American adults. The study, led by Michael Grandner at the University of Pennsylvania, appeared in the journal Sleep.

The original goal was to confirm the popular belief that aging is connected with increased sleep problems. The survey did find an increase during middle age, especially in women. But except for that, people reported that they felt their sleep quality improved as they got older.