Update Required To play the media you will need to either update your browser to a recent version or update your Flash plugin.
By Bryan Lynn
23 January, 2018


Machines equipped with artificial intelligence (AI) have performed better than human beings in a high-level test of reading comprehension.

One of the tools is a product of the American software maker Microsoft. The other was created by the Chinese online seller Alibaba Group.

Alibaba reported its success earlier this month. The company said that a deep-learning model developed by its Institute of Data Science of Technologies was the first to beat a human score in the reading comprehension test.

The test is called the Stanford Question Answering Dataset. It was developed by researchers at Stanford University in California.

The test has over 100,000 questions and answers. They are based on information found in over 500 stories from the Wikipedia website. The answers to all the questions come from the reading material.

The AI-powered machines were tested on whether they could provide exact answers to the questions after processing large amounts of information.

Alibaba said its deep neural network model received an "Exact Match" score of 82.44 on the Stanford test. Microsoft reported that a team at Microsoft Research Asia had a score of 82.65. It said the human score on the same questions and answers was 82.304. 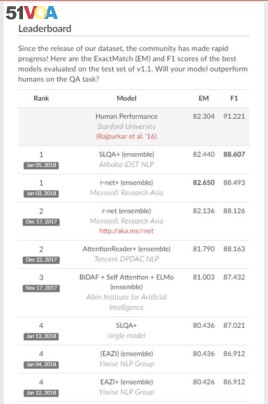 The Stanford Question Answering Dataset (SQuAD) is a reading and comprehension dataset consisting of questions posed by crowd workers on a set of Wikipedia articles. The dataset's "leaderboard" shows the top performing models that had methods tested. (Sta

Microsoft and Alibaba were tied for first place on a list of the top performers on the Stanford test. Many research organizations also appeared on the list – all with scores below 82.

Luo Si is the chief scientist for Alibaba's Institute of Data Science of Technologies. Luo said it was a "great honor" for his group to be part of such a technological milestone. He noted that researchers have made great progress in the area of machine reading and comprehension over the past year.

"We look forward to sharing our model-building methodology with the wider community and exporting the technology to our clients in the near future," he added.

Alibaba said it has already used its reading comprehension model in different parts of its business. For example, the company is using machines to answer many incoming telephone calls from customers.

The company says in the future, the technology could enable machines to guide visitors through museums or provide advice to medical patients.

Microsoft said its success in the reading test marks an important development for artificial intelligence and its reading capabilities. Microsoft said it has already used its AI methods in its Bing search engine and the Cortana digital assistant.

The company said in a blog post that it believes the technology will lead to easier, more natural communication between people and machines in the future.

As machine reading and comprehension technology continue to develop, computers will be able to study and process large amounts of text quickly, Microsoft said. The machines could then provide people with very specific details from the information in an easy, understandable way.

Ming Zhou serves as assistant managing director at Microsoft Research Asia. He said the reading test results were truly an important milestone in the development of AI. But he noted that, overall, people are still much better than machines at understanding the complexity and nuances of language.

"Natural language processing is still an area with lots of challenges that we all need to keep investing in and pushing forward," Zhou said. "This milestone is just a start."

artificial intelligence - n. the ability of a machine to reproduce human behavior

comprehension – n. the ability to understand something

score – n. the number of points received in a test or game

software – n. programs for a computer or computer system

online – adj. connected to or available through a computer or telecommunications system

museum – n. a building where interesting or valuable objects are shown to the public

nuance – n. a slight difference in meaning or appearance.