Update Required To play the media you will need to either update your browser to a recent version or update your Flash plugin.
By Bryan Lynn
12 December, 2018


A team of machine learning developers has created a system for making caricatures of people's faces.

In a caricature, the artist creates a drawing of a face, with different parts of it greatly enlarged, or exaggerated, in other ways. The pictures or images are usually made to make the person look funny.

Such drawings can be difficult for machines to produce. This is often because the human face is made up of complex shapes with a lot of extremely small details. Generally, good caricatures require skilled artists who can effectively exaggerate faces, while still staying true to life.

The new system for making caricatures is the creation of computer scientists from the City University of Hong Kong and Microsoft Corporation. They presented their findings at a recent computer graphics conference in Tokyo.

Kaidi Cao led the research. He is currently studying computer science at Stanford University in California. He helped develop the system while working as a volunteer at Microsoft. Other members of the team were Lu Yuan of Microsoft and Jing Liao of the City University of Hong Kong.

Cao describes the process as a "photo-to-caricature translation." He says other machine systems for creating caricatures depend on a series of rules, which are based on how people would draw. But his team's system uses machine learning to create the caricatures from thousands of examples made by experienced artists. 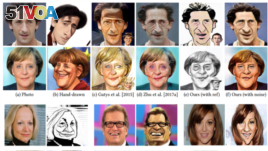 Kaidi Cao, a former intern at Microsoft and now a student at Stanford University in California, developed along with a team of researchers a machine-learning system to create realistic-looking caricatures. (Photo: Kaidi Cao)

In a paper explaining his research, Cao said other machine-based systems appear to pay more attention to appearance and style. But his team's research uses a second machine learning tool to add "geometric exaggeration."

The new method improves on existing ones "in terms of visual quality and preserving identity," Cao wrote. In addition, the system gives users more ability to change results in both shape exaggeration and appearance, he added.

The team tested how recognizable its caricatures were to human test subjects in two separate studies.

In the first study, people were shown caricatures and then asked to choose the correct one from a group of images with faces that looked very similar.

Test results showed that in many cases, people had difficulty choosing the correct image when the caricatures were created with the older methods. The researchers said this was because such systems often created caricatures that were far too exaggerated or unclear.

Not surprisingly, the most easily recognized caricatures in the experiment were made by humans. But the researchers said their system performed better in tests with human subjects than the older methods.

The second study tested how close the system's caricatures were to hand-made caricature styles. People were first shown eight caricatures drawn by artists. They were then presented with one hand-drawn caricature and five machine-created examples. Test subjects were then asked a series of questions about which examples were the most similar.

Results showed that people taking part in this experiment chose the team's machine-created caricature about 23 percent of the time. This means the system "can fool users into thinking it is the real hand-drawn caricature," the researchers wrote. The team noted, however, that "an ideal fooling rate" for such a system would be about 50 percent.

To date, the team has mostly worked on developing caricatures of people's faces. But the researchers say they plan to expand on this in the future to include full bodies and other objects.

They also plan to explore turning the current model around to permit caricature-to-photo translation. The team says it believes this might be useful for facial recognition of caricatures.

What are your thoughts on these machine-created caricatures? Write to us in the Comments section, and visit 51VOA.COM.

caricature – n. a funny drawing of someone that makes part of their appearance or character more noticeable than it really is

exaggerate – v. make something seem larger, better or worse than it really is

translation – n. process of changing from one form to another, such as with languages

style – n. way of doing something that is typical of a particular person, group, place, or period

geometric – adj. of, relating to, or according to the methods or principles of geometry

preserve – v. to keep something the same or prevent it from being damaged or destroyed