Update Required To play the media you will need to either update your browser to a recent version or update your Flash plugin.
By Bryan Lynn
24 August 2022

The system works by measuring a person's breathing patterns during sleep. A study describing the method says it can also measure the severity of disease and record its progression. The study recently appeared in the publication Nature Medicine.

The researchers note that early signs of Parkinson's disease are not easy to discover. Many signs, or symptoms, only appear years after the disease sets in. 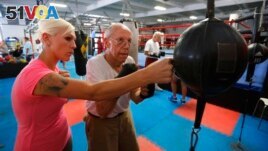 FILE - Parkinson's patient Jim Coppula gets some pointers from his daughter Ellen as he works out on a bag during his Rock Steady Boxing class in Costa Mesa, California September 18, 2013. (REUTERS/Mike Blake)

Researchers have investigated other methods for identifying, or detecting, the disease before it has a chance to develop. These included examinations of brain fluid or brain images. But these methods are costly and require specialized medical centers.

The research team says the new AI-based system is simple and can identify the disease early in its development.

Parkinson's is a neurological disease that harms the brain. It often causes patients to lose the ability to control their movements. This can affect a patient's walking movements and cause body tremors. Many patients also suffer from cognition problems, as well as mental health issues and sleep difficulties.

The World Health Organization (WHO) reports Parkinson's disease is currently the fastest growing neurological condition worldwide. Cases of the disease have doubled during the past 25 years.

The WHO estimates that more than 8.5 million people worldwide have Parkinson's. Because of its effects on the body, dealing with the disease can put pressure on the health care system and individual caregivers.

The AI method to identify Parkinson's was developed by researchers at the Massachusetts Institute of Technology (MIT) and other educational and health organizations.

The system records data about a person's nighttime breathing. This information is collected by devices that measure signals from a breathing sensor on the body or from radio signals in the room.

The data is then processed through what the researchers call a neural network. A neural network is a computer system built to simulate, or act like, the human brain.

The neural network used by the Parkinson's disease tool contains "a series of connected algorithms," the researchers said in a statement. The algorithms examine the subject's breathing patterns in an effort to predict the presence of disease.

Dina Katabi is a professor of electrical engineering and computer science at MIT. She helped lead the research. She said the act of breathing has always been connected to Parkinson's disease. "A relationship between Parkinson's and breathing was noted as early as 1817, in the work of Dr. James Parkinson," Katabi said.

She said this connection led the research team "to consider the potential of detecting the disease from one's breathing without looking at movements." Past studies have shown that breathing patterns linked to Parkinson's can appear years before other symptoms. This means the AI system can be an early predictor of the disease, Katabi said.

The algorithm was tested on 7,687 individuals, including 757 Parkinson's patients. The study included data from several American hospitals and other public information.

The experiments showed that with just one night of sleep, the AI system was able to detect Parkinson's disease with up to 86 percent accuracy, the study found. With 12 nights of data, the rate went up to 95 percent.

The researchers say the simplicity of the tool will enable many more people to be tested for the disease in their homes. They said this can especially help people in traditionally underserved communities, as well as individuals living in rural areas or with limited abilities to visit hospitals.

Bryan Lynn wrote this story for VOA Learning English, based on reports from MIT and Nature Medicine.

tremor – n. a shaking of part of the body that cannot be controlled

cognition – n. the mental action or process of gaining knowledge and understanding through thought, experience and the senses

potential – n. a possibility when the necessary conditions exist