Update Required To play the media you will need to either update your browser to a recent version or update your Flash plugin.
By Christopher Jones-Cruise
15 July, 2017


Three leading aid groups have launched an effort to help children of refugees and migrant workers in Europe.

The groups say they are concerned about thousands of refugee and migrant children are traveling alone or have been separated from their families. They say these boys and girls risk trafficking, abuse and violence because European asylum countries have failed to protect them.

To correct this situation, the groups have developed a plan to protect vulnerable children arriving and staying in Europe. It is called a "Roadmap for Action." 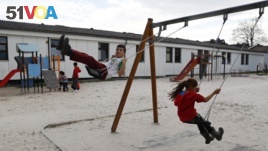 FILE - Children play in a playground at the camp for migrants and refugees in Friedland, Germany, April 4, 2016. (REUTERS/Kai Pfaffenbach)

Diane Goodman is with the UNHCR.

She said, "While the total number of arrivals to Europe has decreased, the situation of unaccompanied and separated children remains an emergency. It is wrong to assume that children are safe as soon as they reach Europe. They are not. In fact, many children experience violence, abuse and exploitation while in Europe, and Europe is failing these extremely vulnerable children."

Goodman noted that the children are often detained when they arrive in Europe. She says many are placed in large centers with adults. Others live in empty buildings, train stations or on the streets.

"Without safe and appropriate care, we will never be able to establish trust or find a solution in the child's best interests," Goodman said.

UNICEF says millions of people are affected by fighting in Syria, Iraq and Afghanistan. It says these conflicts often force children and their families to make the dangerous trip across the Mediterranean Sea.

The Roadmap was developed after discussions with 100 people knowledgeable about the problems facing vulnerable children. The group includes legal guardians, social workers and lawyers, as well as officials from several European countries and the European Union.

Annalisa Brusati is the child protection senior technical adviser at the IRC. She noted that information provided by refugee and migrant children was used in the development of the Roadmap. She said a 14-year-old boy from Algeria told aid workers that "all children my age are not feeling safe. They are forced to go into war and they are all dying. We deserve a normal childhood like other children in the world."

A 17-year old Afghan boy said he and other children felt unprotected during their trip to Europe. He said: "We were forced to trust the smugglers."

The Roadmap says vulnerable children should be identified and a relationship of trust created with them "as early as possible." It also says a well-trained guardian should take immediate responsibility for the child.

David Mcloughlin of UNICEF told VOA that "this is a really important part because every child needs to feel safe as soon as possible. They need someone who is responsible that can be trusted as a guardian."

Since July 2015 more than 130,000 unaccompanied and separated children have arrived in Europe. The United Nations reports more than 5,000 children traveled to Greece, Italy, Bulgaria and Spain during the first three months of this year. It says almost 70 percent of them traveled alone.

In March, Italy's parliament passed a law to support and protect the record number of unaccompanied and separated children who had arrived in the country. Almost 26,000 did so in 2016. That number is expected to increase this year.

The aid agencies report that most unaccompanied children arriving in Europe were boys between the ages of 15 and 17.

They reported that 94 percent of the 3,714 children who arrived in Italy were unaccompanied or separated. Most came from Bangladesh, Gambia, Guinea and Ivory Coast.

Lisa Schlein reported this story from Geneva for VOANews. Christopher Jones-Cruise adapted her report for Learning English. George Grow was the editor.

unaccompanied – adj. without another person

smuggler – n. someone who moves (someone or something) from one country into another illegally and secretly