Update Required To play the media you will need to either update your browser to a recent version or update your Flash plugin.
By VOA
27 April, 2015

Rescue teams and aid workers from around the world are arriving in Nepal's capital, Kathmandu. Many reached Kathmandu on Monday -- two days after a powerful earthquake struck the country. The quake killed more than 4,000 people. Several thousand others were hurt. Experts believe those numbers will increase when crews reach rural areas.

Landslides and wreckage are said to be blocking aid from reaching communities outside the capital. Communications links are down in some areas.

The United States Geological Survey says it expects moderate earthquakes in the area this week.

On Monday, U.S. Secretary of State John Kerry said the United States is providing an additional nine million dollars in aid for Nepal. 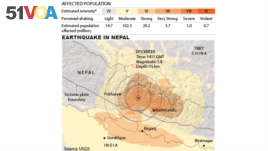 US calls Iran nuclear deal monitoring ‘most extensive' ever

The United States is defending the terms of its tentative agreement with Iran to limit its nuclear activities. U.S. officials say the deal would include what they are calling "the most extensive monitoring" the United States has ever negotiated with any country.

Under Secretary of State Wendy Sherman said the deal would give new protection to Israel by increasing the time Iran would have to develop a nuclear weapon. She made the comments to a Jewish social justice group.

Israeli Prime Minister Benjamin Netanyahu opposes the planned nuclear agreement between Iran and world powers, including the United States. He says it would not stop Iran from developing an atomic weapon that would threaten Israel. The nuclear negotiators are working toward completing a final deal by the end of June.

Negotiators from Iran and a group of six world powers have given themselves until the end of June to reach a final agreement. The West believes Iran is using its nuclear program to build atomic weapons. Iran says its nuclear program is being developed to provide electricity to its people.

Funeral Monday for black man who died in Police detention

Mourners filled a church in the U.S. city of Baltimore Monday. They went there for the funeral of Freddie Gray, a 25-year-old black man who died from an injury suffered while being held by police. Mr. Gray suffered severe spinal cord injuries and died a week after his arrest. Police have not yet said when and how he was injured.

Protesters have been demanding justice in daily demonstrations that have been largely peaceful. But there was some violence on Saturday.

Police officials say more information on the case is expected later this week.

Japanese Prime Minister in US

Japanese Prime Minister Shinzo Abe has begun a visit to the United States. Mr. Abe will visit four cities and will meet with President Barack Obama. On Wednesday, the Japanese leader will speak to a joint meeting of the U.S. Congress.

The United States and Japan plan to expand their military cooperation. High-level officials from the two countries met in New York Monday before announcing changes to a defense cooperation agreement. The measure was last amended in 1997.

Leaders of the ten-nation member Association of Southeast Asian Nations are in Malaysia for two days of meetings. The leaders were expected to discuss China's activities in the South China Sea.

Malaysia's prime minister spoke to the other leaders on Monday. He said they should work to peacefully control territorial disputes with China without increasing tensions in the area.

In his words, "Respect for international law, including the 1982 United Nations Convention on the Law of the Sea, must be the basis of the rules of engagement and activities in the South China Sea."

China has been developing the Spratly Islands. The Philippines, Vietnam, Malaysia, Brunei and Taiwan also have claimed territory in the area.

Australian officials are working to save two of the country's citizens from being executed in Indonesia. On Monday, Australia's foreign ministry urged Indonesian officials to delay the executions until reports of corruption in their trial could be investigated.

Australia says the judges in the case had asked for tens of thousands of dollars to sentence the two men to less than 20 years in prison.

On Saturday, the Indonesian government informed the two and eight other jailed drug traffickers of plans to execute them. It said they could be put to death as early as Tuesday night.