Update Required To play the media you will need to either update your browser to a recent version or update your Flash plugin.
By Mario Ritter
15 January 2023


On December 24, the Taliban government of Afghanistan barred Afghan women from working in non-governmental organizations.

The ban resulted in the suspension of many aid operations and services because organizations said they could not or would not work without the female workers. Aid agencies warn that hundreds of thousands of people have been hurt in the weeks since the Taliban announced the policy. The aid groups also say that, if the ban continues, living conditions and economic problems will continue to worsen.

Aid agencies and NGOs, or non-governmental organizations, have been important since the Taliban took control of the country in August 2021. As a result, international banking and finance organizations suspended international financing services and cut off money supplies. These suspensions hurt the economy even more after years of war. 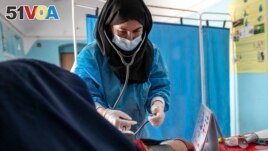 FILE - A Save the Children midwife provides Zarmina, 25, who is five months pregnant, with a pre-natal check-up in Jawzjan province in northern Afghanistan, Sunday, Oct. 2, 2022. (Save the Children via AP, File)

Eleven major international aid groups and some smaller ones suspended all operations after the Taliban banned women from working for NGOs. Many others reduced their efforts. U.N. Women, the United Nations office for gender equality, said after the ban only 14 percent of international NGOs were operating normally.

U.N. agencies have continued some operations. The World Food Programme (WFP) provided food or payments to 13 million people, about 25 percent of the population, in December and early January.

The Associated Press reports that enforcement of the ban has been uneven. Some women have been able to continue working.

However, the International Red Cross (IRC) has suspended all its operations. That means 165,000 people did not receive its health services over two weeks following the ban. The IRC supports more than 100 health centers in 11 provinces, including 30 mobile health teams.

Samira Sayed-Rahman is with the International Rescue Committee, an aid agency. She said her organization provides "the only healthcare that some women have access to." She said parts of Afghanistan have no medical centers.

The IRC says it helps families displaced by war and natural disasters. It provides water, shelter and necessities. The group reported that it helped more than 6 million people in a one-year period ending in 2022.

Keyen Salarkia is with the aid group Save the Children, which suspended its activities in Afghanistan on December 25. "Children's lives are hanging in the balance," Salarkia said.

The U.N. estimates one million children under the age of five will likely face a severe lack of food this year. Salarkia said it was especially important to get enough of the right food in the first one hundred days of a baby's life.

Before suspending its services, Save the Children said it was providing classes for children, immunization and child protection. Without its support, the group said children will be forced to marry or forced to work.

A team of female doctors and nurses deployed to mountainous areas to treat people. When they got to one place, they found that the men had been treated but not the women. The women had stayed inside their tents because there were no women aid workers.

Sayed-Rahman said she had to meet with local leaders to tell them about the female medical team and that the women should come out and get treated.

"The women still had blood on them," she said.

gender –n. the state of being male or female